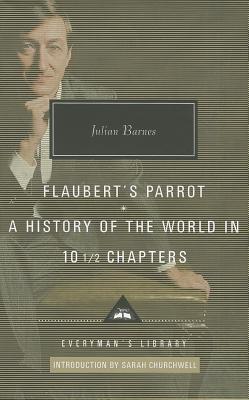 By Julian Barnes, Sarah Churchwell (Introduction by)
$28.95
Unavailable at this time.

An Everyman's Library hardcover omnibus edition of two of the Booker Prize-winning author's earliest and most admired novels, neither of which has been available in hardcover for more than two decades. With full-cloth binding, a silk ribbon marker, a chronology, and a new introduction.

Flaubert's Parrot, Julian Barnes's breakthrough book—shortlisted for the Booker Prize in 1984—is the story of Geoffrey Braithwaite, a retired doctor who is obsessed with the French author and with tracking down a stuffed parrot that once inspired him. Barnes playfully combines a literary detective story with a character study of its detective, embedded in a brilliant riff on literary genius. A History of the World in 10 1/2 Chapters is a mix of fictional and historical narratives of voyage and discovery—ranging from a woodworm's perspective on Noah's ark to a survivor from the sinking of the Titanic—that question our ideas of history. One of his most inventive works, it was praised by Salman Rushdie as "frequently brilliant, funny, thoughtful, iconoclastic, and a delight to read."

JULIAN BARNES's honors include the Man Booker Prize, the Somerset Maugham Award, the Geoffrey Faber Memorial Prize, and the E. M. Forster Award from the American Academy of Arts and Letters. In 2004 he was named Commandeur de l'Ordre des Arts et des Lettres by the French Ministry of Culture.