The Long Walk: A Story of War and the Life That Follows (Paperback) 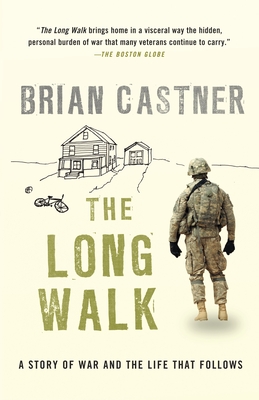 By Brian Castner
$16.95
Unavailable at this time.

Brian Castner is courageous for serving three tours of duty in the Middle East with the Explosive Ordinance Disposal Unit. Yet, he is even more courageous for sharing his true story and allowing readers to get deep inside the mind of a soldier fighting a physical war in Iraq and an emotional war with himself upon returning home.

“This meditation on combat and its aftermath is powerful, exhilarating, and sad, all at once. Castner relates wartime experiences that defy belief but are all too real and quickly remove any romance from the world of violence. Like Karl Marlantes and Benjamin Busch, Castner brings our current wars right onto our doorstep and shows that they are always with all of us, not to be hidden away.”
— Bill Cusumano, Nicola's Books, Ann Arbor, MI

Brian Castner served three tours of duty in the Middle East, two of them in Iraq as the head of an Explosive Ordnance Disposal unit. Whenever IEDs were discovered, he and his men would lead the way in either disarming the deadly devices or searching through rubble and remains for clues to the bomb-makers’ identities. And when robots and other remote means failed, one technician would suit up and take the Long Walk to disarm the bomb by hand. This lethal game of cat and mouse was, and continues to be, the real war within America’s wars in the Middle East. When Brian returned stateside to his wife and family, he entered an equally inexorable struggle against the enemy within, which he comes to call the “Crazy.”

This thrilling, heartbreaking, stunningly honest book alternates between two harrowing realities: the terror, excitement, and camaraderie of combat, and the lonely battle against the unshakeable fear, anxiety, and survivor guilt that he—like so many veterans—carries inside.

Brian Castner, a graduate of Marquette University with an electrical engineering degree, served three tours in the Middle East as an officer of the U.S. Air Force—two of them as the head of an EOD unit in Iraq. In 2006, he received a Bronze Star for his service. Upon returning to the United States following his service, he consulted as a independent civilian contractor, training military EOD units on tactical bomb-disposal procedures prior to their deployment to Iraq and Afghanistan. He lives in Buffalo, New York, with his wife and children.

“Castner’s book maps out this new and sorrowful territory with the skill and focus of someone who has had to defuse a bomb inside his own body.” —Minneapolis Star Tribune

“The Long Walk brings home in a visceral way the hidden, personal burden of war that many veterans continue to carry.” —The Boston Globe

“The enduring treachery of memory . . . remains the real, unfinished story of The Long Walk. It takes as much courage for Castner to confront that memory as it does to face an active fuse.”—The New York Times Book Review

“Castner succeeds in taking readers into the mind of a man who is hopelessly scarred by war.” —USA Today

“Direct and disturbing. . . . A painful but compelling read, even as Castner finds ways to cope, at least partially, with his long walk back at home.” —Morning Edition (NPR)

“Brutally honest [and] sharply observed. . . . The Long Walk is both harrowing and poignant—an intensely personal story of what it takes not just to survive war, but also to fully leave behind the nightmare of combat and readapt to ordinary life.” —The Daily Beast

“So viscerally engaging that it’s hard to read it without shaking. Castner writes with a keen mind, sharp intellect and literary flair. . . . [and] the desperate immediacy of a man whose skin has been burned away.” —Austin American-Statesman

“He gives equal, if not more, weight to the time and effort that goes into readjusting to his family life, and his straightforward, unself-conscious writing paints an absorbing picture of war in the twenty-first century. . . . Castner’s experience isn’t everyone’s, of course, but a memoir like his can help to bridge that gap between civilians and today’s military.” —NewYorker.com

“A powerful book about the long cost of combat and the brotherhood of men at arms. . . . [Castner’s] honesty is refreshing and the book is written with such candor and openness that one can’t help but root for him.” —Anthony Swofford, author of Jarhead

“Do you want to know a little something about our war in Iraq?  Begin with The Long Walk, Brian Castner’s elegant, superbly written story about the bomb disposal guys. . . . Here is the reality of the exhausted mind, and of profound thought wandering all Creation: this is what I saw, this is what I did, this is what I have become.” —Larry Heinemann, author of the National Book Award-winning Paco’s Story and Close Quarters