Heir to the Empire: The 20th Anniversary Edition (Compact Disc) 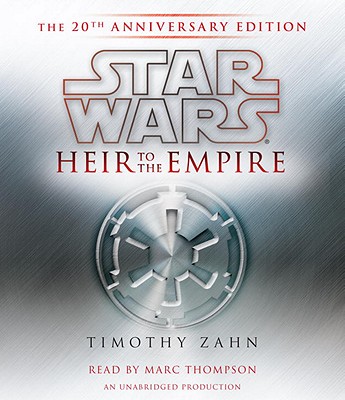 Here is a special 20th anniversary edition of the #1 New York Times bestselling novel that reignited the entire Star Wars publishing phenomenon--featuring an Introduction and annotations from award-winning author Timothy Zahn, exclusive commentary from Lucasfilm and Del Rey Books, and a brand-new novella starring the ever-popular Grand Admiral Thrawn. The biggest event in the history of Star Wars books, Heir to the Empire follows the adventures of Luke Skywalker, Han Solo, and Princess Leia after they led the Rebel Alliance to victory in Star Wars: Episode VI Return of the Jedi. Five years after the Death Star was destroyed and Darth Vader and the Emperor were defeated, the galaxy is struggling to heal the wounds of war, Princess Leia and Han Solo are married and expecting twins, and Luke Skywalker has become the first in a long-awaited line of new Jedi Knights. But thousands of light-years away, the last of the Emperor's warlords--the brilliant and deadly Grand Admiral Thrawn--has taken command of the shattered Imperial fleet, readied it for war, and pointed it at the fragile heart of the New Republic. For this dark warrior has made two vital discoveries that could destroy everything the courageous men and women of the Rebel Alliance fought so hard to create. The explosive confrontation that results is a towering epic of action, invention, mystery, and spectacle on a galactic scale--in short, a story worthy of the name Star Wars. From the Hardcover edition.

Since 1978 Timothy Zahn has written nearly seventy short stories and novelettes, numerous novels, and three short fiction collections, and won the Hugo Award for best novella. Timothy Zahn is best known for his Star Wars novels: Heir to the Empire, Dark Force Rising, The Last Command, Specter of the Past, Vision of the Future, Survivor's Quest, Outbound Flight, and Allegiance, and has more than four million copies in print. His most recent publications have been the science fiction Cobra series and the six-part young adult series Dragonback. He has a B.S. in physics from Michigan State University, and an M.S. in physics from the University of Illinois. He lives with his family on the Oregon coast. From the Hardcover edition.