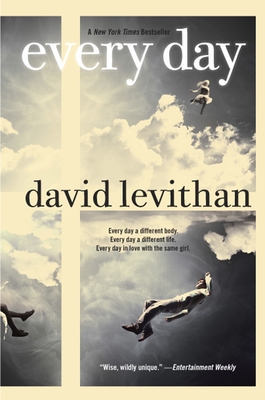 I find the books I love the most are the hardest to write about. This story was a breath of fresh air in a sea of young adult books that seem to retell the same stories over and over. The main characters being, essence, or soul inhabits a different person every day and has done so for their whole life. Then one day they fall in love with the girlfriend of one of the bodies they possess. What happens next was unexpected and wonderful to watch unfold. It was amazing to witness all the lives they encountered and to realize how easy it is to take for granted all the consistencies we have in life. Fascinating and engaging I had trouble putting this down and longed to return to it.

“Caught in the inexplicable fate of awakening each day in a different person's body, 'A' has accepted his destiny. He is able to access the details of the life of the inhabited individual and can lead his or her life, but 'A' has never wished to return to any of them. This changes when he meets Rhiannon. Suddenly, there is a reason to question and alter his circumstances. With this intriguing premise, Levithan explores what it means to be human, and where compassion and understanding are rooted. Captivating and romantic.”
— Mary Alice Garber, Politics & Prose Books and Coffee Shop, Washington, DC

“[A] wise, wildly unique” (Entertainment Weekly) love story from the bestselling co-author of Nick and Norah's Infinite Playlist and Will Grayson, Will Grayson about a teen who wakes up every morning in a different body, living a different life.

There’s never any warning about where it will be or who it will be. A has made peace with that, even established guidelines by which to live: Never get too attached. Avoid being noticed. Do not interfere.

It’s all fine until the morning that A wakes up in the body of Justin and meets Justin’s girlfriend, Rhiannon. From that moment, the rules by which A has been living no longer apply. Because finally A has found someone he wants to be with—day in, day out, day after day.

With his new novel, David Levithan, bestselling co-author of Will Grayson, Will Grayson, and Nick and Norah's Infinite Playlist, has pushed himself to new creative heights. He has written a captivating story that will fascinate readers as they begin to comprehend the complexities of life and love in A’s world, as A and Rhiannon seek to discover if you can truly love someone who is destined to change every day.

“A story that is always alluring, oftentimes humorous and much like love itself— splendorous.” —Los Angeles Times

DAVID LEVITHAN is a children's book editor in New York City, and the author of several books for young adults, including Nick & Norah's Infinite Playlist and Dash & Lily's Book of Dares (co-authored with Rachel Cohn); Will Grayson, Will Grayson (co-authored with John Green); and Every You, Every Me (with photographs from Jonathan Farmer). He lives in Hoboken, New Jersey.

"Fresh, unique, funny, and achingly honest, Levithan brilliantly explores the adolescent conundrum of not feeling like oneself, and not knowing where one belongs. I didn't just read this book — I inhaled it."  —Jodi Picoult, NYT bestselling author of Lone Wolf and Between the Lines

Entertainment Weekly, August 22, 2012:
"Rich in wisdom and wit...Levithan keeps the pages turning not only with ingenious twists on his central conceit but with A's hard-earned pieces of wisdom about identity, isolation, and love. Every Day has the power to teach a bully empathy by answering an essential question: What's it like to be you and not me — even if it's just for one day?"

New York Times Book Review, August 26, 2012:
"It demonstrates Levithan's talent for empathy, which is paired in the best parts of the book with a persuasive optimism about the odds for happiness and for true love."

Los Angeles Times, September 2, 2012:
"It's the rare book that challenges gender presumptions in a way that's as entertaining as it is unexpected and, perhaps most important, that's relatable to teens who may not think they need sensitivity training when it comes to sexual orientation and the nature of true love. ‘Every Day' is precisely such a book...A story that is always alluring, oftentimes humorous and much like love itself — splendorous."

MTV Hollywood Crush, September 28, 2012:
"Thoughtful and fascinating...A study in the most real and human of concerns: the importance of empathy, the value of friends and family, and the beauty of permanence that we have the luxury of taking for granted."

OUT Magazine, December 2012:
"One of the most inventive young adult novels of the year."

Romantic Times, October 2012:
"Levithan is a literary genius. His style of writing is brilliant — practically flawless... Reading A’s journey to make love last, in a world that is always changing, is an experience I hope everyone gets to share."

Starred Review, School Library Journal, September 2012:
"Every step of the narrative feels real and will elicit a strong emotional response from readers and offer them plenty of fodder for speculation, especially regarding the nature of love.”

Starred Review, Booklist, July 1, 2012:
“Levithan has created an irresistible premise that is sure to captivate readers….
[Every Day] is a study in style, an exercise in imagination, and an opportunity for readers themselves to occupy another life: that of A, himself.”

Starred Review, Shelf Awareness, September 7, 2012:
"Levithan's unusual love story will make teens think about how the core of the soul never changes. A speaks of faith, love, dreams and death with a wisdom derived from thousands of lives visited over 16 years and firsthand proof of how much humans share rather than what sets them apart."

The Bulletin of the Center for Children's Books, September 2012:
"This unconventional romance considers some fascinating and unexpected questions about the nature of identity, consciousness, love, and gender...Readers will identify with A’s profound longing for connection, but they’ll also be intrigued by the butterfly effect A’s presence may have on numerous other teens who make brief but memorable appearances."

The Horn Book, November 2012:
"Brilliantly conceived...[Levithan] shapes the narrative into a profound exploration of what it means to love someone."

The L Magazine, August 29, 2012:
"The premise allows for stimulating parallels: A’s experience is both like the writer’s, who inhabits the consciousnesses of random characters, and the adolescent’s, who tries on myriad identities."