Facing the Wave: A Journey in the Wake of the Tsunami (Hardcover) 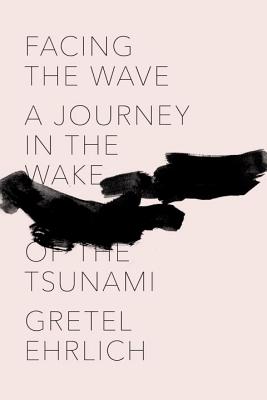 A passionate student of Japanese poetry, theater, and art for much of her life, Gretel Ehrlich felt compelled to return to the earthquake-and-tsunami-devastated Tohoku coast to bear witness, listen to survivors, and experience their terror and exhilaration in villages and towns where all shelter and hope seemed lost. In an eloquent narrative that blends strong reportage, poetic observation, and deeply felt reflection, she takes us into the upside-down world of northeastern Japan, where nothing is certain and where the boundaries between living and dying have been erased by water.

The stories of rice farmers, monks, and wanderers; of fishermen who drove their boats up the steep wall of the wave; and of an eighty-four-year-old geisha who survived the tsunami to hand down a song that only she still remembered are both harrowing and inspirational. Facing death, facing life, and coming to terms with impermanence are equally compelling in a landscape of surreal desolation, as the ghostly specter of Fukushima Daiichi, the nuclear power complex, spews radiation into the ocean and air. Facing the Wave is a testament to the buoyancy, spirit, humor, and strong-mindedness of those who must find their way in a suddenly shattered world.

Gretel Ehrlich is the author of "This Cold Heaven," "The Future of Ice," and "The Solace of Open Spaces," among other works of nonfiction, fiction, and poetry. She lives in Wyoming.

“Lyrical, meandering dispatches and eyewitness accounts from the devastation of the 2011 tsunami in Japan…Ehrlich renders the enormity of loss in a fashion comprehensible to her American readers…eloquent.” –Kirkus

“Gifted, adventurous, and extolled nature writer Ehrlich has abiding connections to Japan, so she returned there soon after the March 2011 earthquake and tsunami…Ehrlich’s invaluable chronicle subtly raises questions about coastal disasters, global warming, and nuclear power as the beauty and precision of her prose and her profound and knowledgeable insights into nature’s might and matters spiritual and cultural evoke a deep state of awe and sympathy.”—Donna Seaman, Booklist

“Ms. Ehrlich’s book adds flesh and soul and spirit to the bare bones of news reporting, filling the void left by the media and reminding us that real people live behind the headlines.” –New York Journal of Books

“As Ehrlich concludes after her nine months there, ‘We can see the pain of loss and swing the other way, encountering the unexpected joy of survival.’ Her own account in this brief but unforgettable book is itself a heartrending and unexpected marvel.” —San Francisco Chronicle

“Skilled reportage…As Ehrlich concludes, ‘We can see the pain of loss and swing the other way, encountering the unexpected joy of survival.’ Her own account, both harrowing and beautifully told, in this brief but unforgettable book is itself a heartrending and unexpected marvel.” —Huffington Post

“Heartbreaking…[Ehrlich’s] reverence for this Asian culture allows her to add personal perspective to the vivid reporting about people whose lives and world were so utterly changed…Accompanying Ehrlich on these difficult but sometimes joyous journeys is reading that’s often hard to bear, but too compelling to set aside.” —Seattle Times

“A haunting elegy and story of renewal in a world torn apart by disaster following the 2011 disasters in Japan…Erhlich writes beautifully, with a poet’s sensitivity towards not only what to write but also what to observe” —Newsweek Daily Beast

“A poetic, heartbreaking look at the immediate aftermath of Japan’s earthquake and tsunami – and all that followed…In sum, the book is a masterpiece of narrative reportage that balances Ehrlich’s own reaction with the voices of the victims.” —Minneapolis Star-Tribune

“A riveting mosaic of reportage and reflection.” —Elle Magazine

“Brave…The language is beautiful and frail, but readers will not find a conventional ending. Instead, Facing the Wave ends with the troublesome realization that the same chaos could crash into one’s own life.” —Fredericksburg Freelance Star

“Gretel Ehrlich is a lyrical and sensitive writer who has written about nature and her manifold mysteries…Facing the Wave ends on a high and holy note of hope.” —Spirituality and Practice Magazine

“[Gretel Ehrlich's] frequent theme is the relationship of people to the environment and how often harsh and ever-changing natural conditions affect their lives. Here, her focus is aftermath, how the survivors of Japan's March 2011 Tohoku earthquake and tsunami continue on post cataclysm. Ehrlich collects their stories, tying them together thoughtfully, even musically, with poetry, science, and her own observations, to achieve a sort of universal empathy that comes from unimaginable circumstance.” —Santa Fe New Mexican