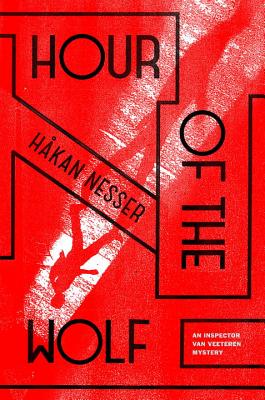 By Hakan Nesser, Laurie Thompson (Translated by)
$25.95
Unavailable at this time.

A boy in a dark duffel coat. Lying in the ditch. Contorted at impossible angles, with his back pressed up against a concrete culvert and his face staring straight at him. As if he were trying to make some kind of contact. As if he wanted to tell him something.

In the middle of a damp, dark night, a young man is struck by a car after leaving his girlfriend’s house. The driver, drunk, leaves the body by the side of the road. Wrestling with guilt, the driver tries to put the murder out of his mind—until a blackmail note arrives, setting into motion a chain of events that will draw everyone involved into a fog of crime.

Reinhart, the new chief inspector of the Maardam police force, sets his team to work. But when the victim of a second, possibly related, killing is identified, Reinhart realizes that this is no ordinary investigation. In Hour of the Wolf, former chief inspector Van Veeteren—a legend now in retirement—is called upon to face his greatest trial yet, when someone close to him is found dead.

Van Veeteren’s former colleagues, desperate for answers, struggle to decipher the clues to these appalling crimes. As the killer becomes increasingly unhinged and unpredictable, Van Veeteren is forced to reenter a world he left behind, and to avenge a death. Told with Håkan Nesser’s trademark eye for detail, breakneck plotting, and gut-wrenching moral tension, Hour of the Wolf finds the Nordic noir superstar spinning one of his darkest tales yet.

HÅKAN NESSER is one of Sweden’s most popular crime writers. He has received many awards for his novels featuring Inspector Van Veeteren, including the European Crime Fiction Star Award, the Swedish Crime Writers’ Academy prize for best crime novel (three times), and Scandinavia’s prestigious Glass Key Award. The Van Veeteren series is published in more than twenty-five countries and has sold more than ten million copies worldwide. Nesser lives in Gotland, Sweden, with his wife.

Praise for Hour of the Wolf

“Of all the Swedes freakishly gifted at writing crime fiction (really, there must be something in the water), Nesser is up there with the best.” —Entertainment Weekly

“Intelligent and appealing . . . Hour of the Wolf was first published in Swedish in 1999 (as Carambole), and it’s taken far too long to reach our shores . . . Like all the Van Veeteren novels, it was worth the wait.” —Bookpage

“Magnificent. . . . Like Kate Atkinson, Nesser draws believable lines between crimes in this series’ sixth tale, linking them with a trail of psychological crumbs and adding a bit of heart to the series’ moody atmosphere and cerebral thrills.”  —Booklist

“No frills, no subplots, no unnecessary moving parts: an autumnal procedural that illustrates what superior results you can get by stripping away the extras.” —Kirkus Reviews

Praise for Håkan Nesser and the Inspector Van Veeteren Mysteries

“This is stylish, atmospheric crime fiction with a strong moral core from an award-winning author; essential for readers of the genre.” —Library Journal

“Nesser’s novels look for the roots of crime in the ills of society . . . He has seized his chance to create his own dark poetry from these stark materials, and the effect is haunting.” —The Wall Street Journal

“Nesser is a master of suspense.” —The Sunday Times (London)