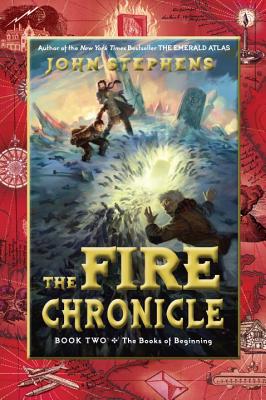 By John Stephens, Jim Dale (Read by)
Unavailable at this time.
Unavailable

This is book number 2 in the Books of Beginning series.

“Three siblings with a mystical destiny tied to books of magic are tossed into the fray again. In this sequel to The Emerald Atlas, middle brother Michael must rise to incredible challenges, while older sister Kate tries to thwart a grim prophecy. The cast of characters widens as more becomes known about The Books of Beginning and those who hunt them. Fabulous settings and richly drawn characters set this fantasy trilogy head and shoulders above most.”
— Rosemary Pugliese, Quail Ridge Books, Raleigh, NC

It's been six months since Kate, Michael, and Emma confronted the Dire Magnus, but the trail to their long-missing parents remains cold. Then Michael and Emma find a man who saw them ten years ago—three days after they disappeared. He knows about a map of a distant land, a place shrouded in mystery that may lead them to their parents.

Meanwhile, Kate's connection to the Book of Time is growing stronger and stronger, until a dangerous trick gets her stuck in the past, searching for a friend to help her.

Only a perilous quest and a daring risk will help the children to harness the power of the Books of Beginning. But will it be enough to save them?

JOHN STEPHENS is also the author of The Emerald Atlas, the first installment in the Books of Beginning trilogy.  He spent ten years working in television and was executive producer of Gossip Girl and a writer for Gilmore Girls and The O.C.

Starred Review, Publishers Weekly, October 8, 2012:
“Fans of The Emerald Atlas will find much to love: the adventure-driven plot, a scattering of deliciously scary moments, and Stephens’s offbeat take on Tolkienesque dragons, dwarves, and elves are sure to delight.”

Starred Review, School Library Journal, October 1, 2012:
“Fans of the first book won’t be disappointed, and will eagerly anticipate the next one. The Emerald Atlas was very good. This one is even better.”