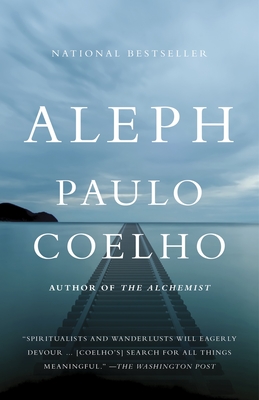 One of Paulo Coelho's many great works. The author of The Alchemist takes you through a spiritual pilgrimage while traveling side by side with him on the Siberian Railway that changes the way you look at love, spirituality and the universe. This story is life- changing.

Transform your life. Rewrite your destiny.

In his most personal novel to date, internationally bestselling author Paulo Coelho returns with a remarkable journey of self-discovery. Like the main character in his much-beloved The Alchemist, Paulo is facing a grave crisis of faith. As he seeks a path of spiritual renewal and growth, his only real option is to begin again—to travel, to experiment, to reconnect with people and the landscapes around him.

Setting off to Africa, and then to Europe and Asia via the Trans-Siberian railroad, he initiates a journey to revitalize his energy and passion. Even so, he never expects to meet Hilal. A gifted young violinist, she is the woman Paulo loved five hundred years before—and the woman he betrayed in an act of cowardice so far-reaching that it prevents him from finding real happiness in this life. Together they will initiate a mystical voyage through time and space, traveling a path that teaches love, forgiveness, and the courage to overcome life’s inevitable challenges. Beautiful and inspiring, Aleph invites us to consider the meaning of our own personal journeys.

PAULO COELHO is the author of many international best sellers, including The Alchemist, Eleven Minutes, The Pilgrimage, The Fifth Mountain, and Adultery, among others. He has been a member of the Academy of Letters of Brazil since 2002 and in 2007 was named a Messenger of Peace by the United Nations. In 2003, he received the Guinness World Record for most translations of a single title (The Alchemist) signed by the author in one sitting and several years later, in 2009, he received a new Guinness World Record for most translated author for the same book (also for The Alchemist).

Paulo Coelho’s books have been translated into 88 languages and have sold more than 320 million copies in more than 170 countries. His novel, The Alchemist, one of the most influential books of all time, has sold more than 85 million copies and has been cited as an inspiration by people as diverse as Malala Yousafzai and Pharrell Williams. He has received numerous prestigious international awards, including the Hans Christian Andersen Award and the Chevalier de l’Ordre National de la Légion d’Honneur, to name a few.

“Coelho is a novelist who writes in a universal language.” —The New York Times

“It’s time for American readers to set out on a journey of discovery that will lead them to the works of this exceptional writer.” —USA Today

“[Coelho’s] books have had a life-enhancing effect on millions of people.” —The Times (London)

“Spiritualists and wanderlusts will eagerly devour The Alchemist author’s fiery diatribes about love, fear, and the search for all things meaningful.” —The Washington Post

“Aleph is a book written by the soul, and for the soul. At once tender and fiercely courageous, it challenges you with an embrace while seducing you with a discerning blade that points directly at the heart of what matters most in life and death. And when you have finished the last word on the last page, even if your logical mind doesn’t completely understand all that you’ve read, your eternal spirit will be dancing with joy.” —Cecilia Samartin, author of Broken Paradise

“Vivid, captivating. . . . So engaging that readers will not want to put it down for even a fraction of a second. As the author sets out on his journey, the reader gets the sense that, he too, is embarking on the same voyage.” —The International Herald Tribune

“[A] chimerical tale. . . . There’s no better author to serve such a work than Coelho.” —Publishers Weekly

“Enigmatic. . . . An illuminating book.” —The National

“Borges set the standard that Coelho capably upholds. . . . Coelho the writer is both discerning and revealing of Coelho the protagonist, whose enthusiasms we share.” —The Washington Independent Review