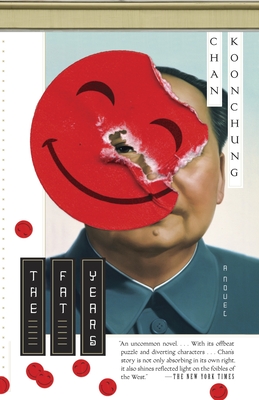 By Chan Koonchung, David Tse (Translated by)
Unavailable at this time.
Unavailable

An entire month has gone missing from Chinese records. No one has any memory of it, and no one seems to care except for a small circle of friends who will stop at nothing to get to the bottom of the sinister cheerfulness and amnesia that have possessed the nation. When they kidnap a high-ranking official and force him to reveal all, what they learn—not only about their leaders, but also about their own people—stuns them to the core.

The Fat Years is a complex novel of ideas that reveals all too chillingly the machinations of the postmodern totalitarian state and sets in sharp relief the importance of remembering the past in order to protect the future.

CHAN KOONCHUNG is a novelist, journalist, and screenwriter. Born in Shanghai and raised and educated in Hong Kong, he studied at the University of Hong Kong and Boston University. He has published more than a dozen Chinese-language books and in 1976 founded the monthly magazine City in Hong Kong, of which he was the chief editor and then publisher for twenty-three years. He has been a producer on more than thirteen films. Chan Koonchung now lives in Beijing.

“An uncommon novel….  With its offbeat puzzle and diverting characters … Chan’s story is not only absorbing in its own right, it also shines reflected light on the foibles of the West.” —The New York Times

“Smart, incendiary. . . . Although The Fat Years clearly owes a debt to Brave New World, Chan’s characters are infinitely more believable, and drawn with a real sense of sympathy and understanding.” —Michael Schaub, NPR

“It’s no wonder that the insecure Chinese authorities have banned this book in China itself.  It tells stunning truths that those authorities strive hard to keep under the rug, and it tells them with a literary flair worthy of Orwell.” —Richard Bernstein, author of The Coming Conflict with China

“In conjuring China’s very near future, Chan Koonchung has given us a bracingly honest portrait of the present.” —The New Yorker

“A not-so-veiled satire of the Chinese government’s tendency to make dates such as the Tiananmen massacre of June 4 1989 virtually disappear from the country’s history.” —Financial Times

“Inventive and highly topical.” —The Wall Street Journal
“An audacious view of a counterfeit paradise. . . . This novel isn’t only essential reading, it is also urgent.” —The Globe and Mail (Toronto)
“To touch on so many issues . . . in such a compelling narrative is a triumph, abetted by an excellent translation by Michael Duke.” —The Guardian (London)

“A thought-provoking novel about China’s tomorrow that reveals the truth about China today.” —Xinran, author of The Good Women of China

“The Fat Years presents a vivid, intelligent and disturbing picture of the world’s emerging super-power.” —The Spectator

“Eerily prescient. . . A gripping . . . treatise on the rise of China, present and future.” —Toronto Star

“Hardly a thriller in the conventional sense of the word but a lot more scary than most.” —The Times (London)