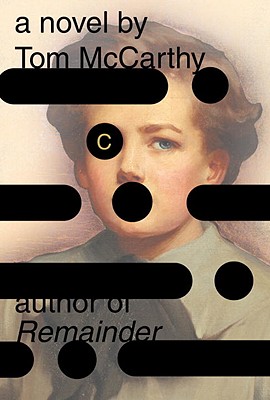 “Finishing this novel was like waking from a long curious dream. Serge Carrefax's family is wealthy, prolific, and eccentric, and Serge drifts through life as though viewing it from a great height. McCarthy's writing is both brilliantly inventive and, at the same time, familiarly classic.”
— Grant Novak, The Vermont Book Shop, Middlebury, VT

C has been shortlisted for the 2010 Man Booker Prize.


The acclaimed author of Remainder, which Zadie Smith hailed as “one of the great English novels of the past ten years,”gives us his most spectacularly inventive novel yet.

Opening in England at the turn of the twentieth century, C is the story of a boy named Serge Carrefax, whose father spends his time experimenting with wireless communication while running a school for deaf children. Serge grows up amid the noise and silence with his brilliant but troubled older sister, Sophie: an intense sibling relationship that stays with him as he heads off into an equally troubled larger world.

After a fling with a nurse at a Bohemian spa, Serge serves in World War I as a radio operator for reconnaissance planes. When his plane is shot down, Serge is taken to a German prison camp, from which he escapes. Back in London, he’s recruited for a mission to Cairo on behalf of the shadowy Empire Wireless Chain. All of which eventually carries Serge to a fitful—and perhaps fateful—climax at the bottom of an Egyptian tomb . . .

Only a writer like Tom McCarthy could pull off a story with this effortless historical breadth, psychological insight, and postmodern originality.

Tom McCarthy was born in 1969 and lives in London. He is known in the art world for the reports, manifestos, and media interventions he has made as General Secretary of the International Necronautical Society (INS), a semi-fictitious avant-garde network. His previous books are "Remainder" and "Tintin and the Secret of Literature."

“Remarkable not for its austerity but for its unlikely, panoramic ambition . . . C is a bird so rare as to seem oxymoronic: an avant-garde epic, the first I can think of since Ulysses.”
—Jonathan Dee, Harper’s Magazine

“Unquestionably brilliant . . . This is a genuinely exciting and spookily beautiful book, a new kind of joy.”
—The Times (London)

“A supercharged, fizzingly written Bildungsroman . . . the remix the novel has been crying out for.” —Sunday Times

“Beautiful . . . a thrilling tale. This is one of the most brilliant books to have hit the shelves this year, and McCarthy deserves high praise for an electric piece of writing which should be read and enjoyed as much as dissected and discussed.”—Sunday Telegraph

“A dizzying, mesmeric and beautifully written work . . . Tom McCarthy has written a novel for our times: refreshingly different, intellectually acute and strikingly enjoyable . . . it seems highly unlikely that anyone will publish a better novel this year.”—Daily Telegraph

“Each chapter of McCarthy’s tour de force is a cryptic, ornate puzzle box, rich with correspondences and emphatically detailed digressions. Ambitious readers will be eager to revisit this endlessly interpretive world, while more casual readers will marvel at the high-flying picaresque perched at the crossroads of science and the stuff dreams are made of.”
—Publishers Weekly (Starred, boxed review)

“A literary roller-coaster ride that virtually hums and crackles . . . A marvelously inventive novel, swept along by the sheer energy of its prose.”
—Booklist

“C is for carbon and cocaine, Cairo and CQ, and many other things besides. Under the elegant curve of the letter lies a fantastically detailed landscape of tiny pen-strokes that, if seen from high enough above, coalesce into a face, laughing uproariously. Tom McCarthy’s latest is terrifically stylish, acrobatic, and insidious.”
—Luc Sante