Hoodwinked: An Economic Hit Man Reveals Why the Global Economy IMPLODED -- and How to Fix It (John Perkins Economic Hitman Series) (Paperback) 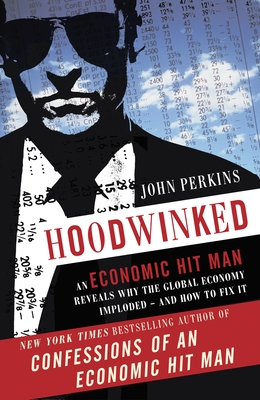 John Perkins has seen the signs of today's economic meltdown before. The subprime mortgage fiascos, the banking industry collapse, the rising tide of unemployment, the shuttering of small businesses across the landscape are all too familiar symptoms of a far greater disease. In his former life as an economic hit man, he was on the front lines both as an observer and a perpetrator of events, once confined only to the third world, that have now sent the United States—and in fact the entire planet—spiraling toward disaster.

Here, Perkins pulls back the curtain on the real cause of the current global financial meltdown. He shows how we've been hoodwinked by the CEOs who run the corporatocracy—those few corporations that control the vast amounts of capital, land, and resources around the globe—and the politicians they manipulate. These corporate fat cats, Perkins explains, have sold us all on what he calls predatory capitalism, a misguided form of geopolitics and capitalism that encourages a widespread exploitation of the many to benefit a small number of the already very wealthy. Their arrogance, gluttony, and mismanagement have brought us to this perilous edge. The solution is not a "return to normal."

We can create a society that fosters a just, sustainable, and safe world for us and our children. Each one of us makes these choices every day, in ways that are clearly spelled out in this book.

"We hold the power," he says, "if only we recognize it." Hoodwinked is a powerful polemic that shows not only how we arrived at this precarious point in our history but also what we must do to stop the global tailspin.

JOHN PERKINS is the bestselling author of the classic exposé Confessions of an Economic Hit Man and an economist who has enjoyed a front-row seat to world events for the past four decades—as the chief economist of a major consulting firm and economic hit man for the American corporatocracy in the 1970s, CEO of an energy company in the 1980s, and founder of nonprofits in the 1990s and 2000s. He spent the past five years traveling across the United States and to many other countries where he met with government and corporate leaders, spoke at universities and business conferences, talked with people from all walks of life, and gained invaluable insights into the underlying causes of the current crisis.

"John Perkins has been in and out of the world of high finance and low ethics, and in Hoodwinked he not only illuminates that world with dramatic stories and keen insights, but suggests what we might do to create a better society."

—Howard Zinn, bestselling author of A People's History of the United States

"Another thriller from the master storyteller with an insider view. Perkins takes us once again into the dark netherworld of corrupt bankers and economic hit men who lure the unsuspecting into financial ruin and reveals the connection between the folks who for decades enriched themselves at the expense of the world's poor and those who now reap billions at the expense of America. Same people, same scams."

—David Korten, author of Agenda for a New Economy and The Great Turning, and board chair of YES! magazine

"John Perkins' engaging narrative draws us into a brilliant analysis of capitalism's shadow side, and points us to a hopeful path to a better future. Hoodwinked is a must-read for anyone who cares about our economic welfare, social justice, and our collective well-being."

Acclaim for Confessions of an Economic Hit Man

"A bombshell. One of those rare instances in which someone deeply entrenched in our governmental/corporate imperialist structure has come forward to reveal in unequivocal terms its inner workings. A work of great insight and moral courage."

—John E. Mack, Harvard professor and Pulitzer Prize–winning author of A Prince of Our Disorder: The Life of T. E. Lawrence

"Stunning and groundbreaking. . . . A must-read for anyone who cares about the world."

—Lynne Twist, global activist and author of the bestselling The Soul of Money

"With unflinching honesty, Perkins narrates his moral awakening and struggle to break free from the corrupt system of global domination he himself helped to create. This book . . . comes from the heart. I highly recommend it."