After the Fire, a Still Small Voice (Paperback) 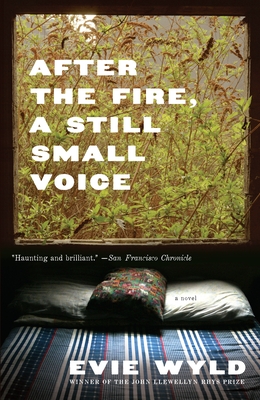 Evie Wyld's writing about rural Australia is so lush and raw that you can smell the breeze that whips through the eucalyptus groves, and hear the butcherbird's call. The shredded internal terrain that her characters traverse is written with such astute empathy that by the middle of the novel you begin to physically feel the gaze of monsters both real and imagined. You begin to wonder what could be lurking at the edge of that eldritch sugarcane field.

After the departure of the woman he loves, Frank struggles to rebuild his life among the sugarcane and sand dunes that surround his oceanside shack. Forty years earlier, Leon is drafted to serve in Vietnam and finds himself suddenly confronting the same experiences that haunt his war-veteran father. As these two stories weave around each other—each narrated in a voice as tender as it is fierce—we learn what binds Frank and Leon together, and what may end up keeping them apart.

Set in the unforgiving landscape of eastern Australia, Evie Wyld’s accomplished debut tackles the inescapability of the past, the ineffable ties of family, and the wars fought by fathers and sons.

Evie Wyld grew up in Australia and now lives in London. She received an MA in Creative and Life Writing at Goldsmiths, University of London, and was featured as one of Granta’s New Voices in May 2008. In 2009 she won the John Lewellyn Rhys Prize and in 2010 won a Betty Trask Award and was shortlisted for the Orange Award for New Writers.

“Incandescent. . . . An eerie chiaroscuro of blinding sunlight and tenebrous bush, rendered in language so naturalistic and sensual it seems more felt than read. . . . After the Fire has the kind of dark shimmer that mesmerizes as it disturbs. . . . What distinguishes Wyld is her incandescent empathy for her male characters and the things they are unable to say, the assurance with which she reaches for a rough-edged authenticity over the easy pleasures of lyricism.”
—Vogue

“This surefooted and even-handed multi-layered tale is fiction writing at its best with characters so vividly drawn, they seem to literally leap off of the printed pages.”
—Tucson Citizen

“Mesmerising. . . . A novel both taut and otherworldly. This adroit examination of loss, lostness and trauma is the beginning of great things [for Wyld].”
—The Independent (London)

“A gritty novel. . . . Rough and beautiful. . . . It speaks to the muscle in Wyld’s writing, which in richly telling detail describes the experiences 40 years apart of two Australian men. . . . Wyld distinguishes herself as another fine Australian novelist.”
—Minneapolis Star-Tribune

“Written in pithy, crystal-sharp prose, this is a compelling read that uses the Australian landscape to mirror its characters’ equally unforgiving emotional terrain.”
—Financial Times

“Wyld has a feel both for beauty and for the ugliness of inherited pain. The mood is creepy—strange creatures in the sugar cane, grieving neighbors, a missing local girl—and the sentiment is plain: ‘Sometimes people aren’t all right and that’s just how it is.’”
—The New Yorker

“A searching study of the way war-induced damage passes from fathers to sons. . . . Uniting the disparate narratives is Wyld’s brisk, atmospheric style and her fascination with men who commit appalling acts, but are not appalling people.”
—Times Literary Supplement (London)

“Passionate. . . . After the Fire is not a book of simple feelings. . . . One must admire Wyld for her courage.”
—Bookpage

“Just sometimes, a book is so complete, so compelling and potent, that you are fearful of breaking its hold. This is one. . . . With awesome skill and whiplash wit, Evie Wyld knits together past and present, with tension building all the time. In Peter Carey and Tim Winton, Australia has produced two of the finest storytellers working today. On this evidence, Wyld can match them both.”
—Daily Mail (London)

“Ravishingly atmospheric and wisely compassionate. . . . There’s no doubt that Wyld is a writer of immense abilities and depth.”
—Booklist

“A triumph of subtle, original and unsentimental writing . . . Wyld explores the restrictions and distortions in the lives of men who won’t or can’t talk through whatever is eating away at them [with] great restraint and poignancy.”
—The Australian