The Oath: The Obama White House and The Supreme Court (Paperback) 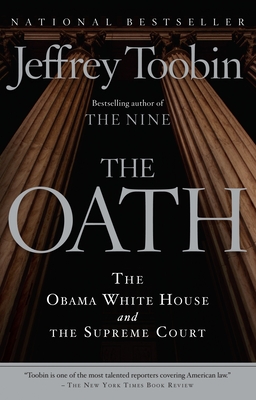 From the moment Chief Justice Roberts botched Barack Obama's oath of office, the relationship between the Court and the White House has been a fraught one. Grappling with issues as diverse as campaign finance, abortion, and the right to bear arms, the Roberts court has put itself squarely at the center of American political life. Jeffrey Toobin brilliantly portrays key personalities and cases and shows how the President was fatally slow to realize the importance of the judicial branch to his agenda. Combining incisive legal analysis with riveting insider details, The Oath is an essential guide to understanding the Supreme Court of our interesting times.

Jeffrey Toobin is the bestselling author of The Nine, Too Close to Call, A Vast Conspiracy, and The Run of His Life. He is a staff writer at The New Yorker and the senior legal analyst at CNN. He lives with his family in New York.

"Toobin is one of the most talented reporters covering American law." —The New York Times Book Review

“Deeply versed in Supreme Court lore and legal subtlety, [Toobin] draws upon first-hand interviews with the justices and their clerks in crafting an anxious tale of the Roberts court, casting its major rulings as looming symbols of judicial philosophy. . . . A polished and thoughtful dissection.” —USA Today

“A compelling narrative of the early years of the Roberts court. . . . The many pleasures of The Oath come . . . from human details about the justices and their interactions with the White House.” —The Washington Post

“Anyone fascinated by the inner workings of the highest court in the land will be delighted.” —The Huffington Post

“Not until scholars a generation hence gain access to the justices’ papers are we likely to have a more useful, or more readable, picture of this oddly assorted group of judges at this moment in history.” —The New York Times Book Review

“A worthy successor to The Nine, The Oath is a work of probity, intelligence and exceptional reporting.” —Richmond Times-Dispatch

“Might . . . be viewed eventually as the best book about the court during the opening half-decade of John Roberts’ reign as chief justice. . . . Toobin does his job well.” —The Seattle Times

“Court watchers, serious and occasional, will find Toobin’s explanation of the issues at stake . . . before the Roberts court well worth their time.” —St. Louis Post-Dispatch

“Exceptionally readable. . . . Blends strong reporting with a sure historical grasp of the court.” —The Columbus Dispatch

“An artfully constructed chronicle. . . . The Oath delivers a bracing survey of the court’s key decisions and divisions. . . . Toobin’s sketches of the justices are fabulous.” —Bookforum

“Lucid, lively and astute. . . . Toobin has the chops (and the contacts) to take readers inside the court.” —Minneapolis Star Tribune

“For political, and governmental, junkies. . . . Fall[s] into the Robert Caro–Lyndon Johnson category. . . . Reminds us that it is the interplay between different personalities and agendas that more than any scholarly argument or historical text is often at the heart of the laws we live with.” —The Boston Globe

“A reliable and astute guide through the thicket of legalese.” —The Miami Herald

“Toobin [is] a rare authority who knows how to write. . . . This is, in short, a book suitable for reading in the study or while sprawled at the beach.” —Chicago Sun-Times

“A revealing look at the ideological battle between the White House and the Supreme Court.” —Booklist (starred review)

“A skillful probing of the often-discordant relationship between the president and the Supreme Court. . . . Shrewd and elucidating.” —Kirkus Reviews