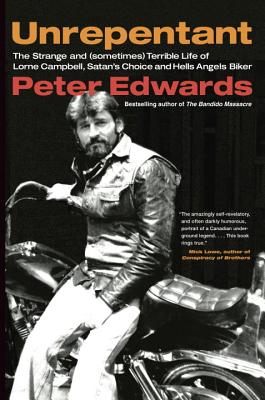 In this explicit first-hand account, a biker who spent 46 years as a member of the Hells Angels and Satan's Choice invites bestselling author Peter Edwards into the story of life lived as we've only imagined it.
A kid raised by his father's fists on the wrong side of a blue-collar town, Lorne Campbell grew up watching the local bikers ride past, making him wonder what that kind of freedom and power would feel like. He soon found out. At the age of seventeen, he became the youngest-ever member of the Satan's Choice Motorcycle Club and spent the next five decades living a life for which he does not ask forgiveness, only that his story finally be told, and that his family finally understand what drove him to live the way he did. With moments of terror and humour, great sadness and the simple pleasures of camaraderie and the open road, Unrepentant is a book like none other.

Peter Edwards has written for The Toronto Star for twenty-six years, specializing in organized crime and justice issues. He is the author of eleven non-fiction books, including The Bandido Massacre: A True Story of Bikers, Brotherhood and Betrayal; One Dead Indian The Premier, the Police and the Ipperwash Crisis; A Mother's Story: The Fight to Free My Son David (with Joyce Milgaard) and The Encyclopedia of Canadian Organized Crime (with Michel Auger). Edwards has been awarded an eagle feather from the Union of Ontario Indians and a gold medal from the Centre for Human Rights.

"Making sense of...evil is something Edwards does extremely well... Edwards is tenacious in his research and has spun a gripping tale."
—The London Free Press

“Peter Edwards knows how real bad guys eat, sleep, and breathe, and on the page brings them to life—even the dead ones—better than any other true crime writer.”
—Linwood Barclay, international bestselling author

“In the biker world the highest compliment you can pay to another guy is that he is ‘solid.’ It means trustworthy. Dependable. Loyal. Lorne Campbell, for the sake of his brothers, took the stand and confessed to a crime that he had not been implicated in, in any way, knowing that he might well spend the rest of [his] life in prison. It doesn’t get any more solid than that.”
—Steve Earle, Grammy Award–winning singer/ songwriter

“Peter Edwards is one of the best crime writers in Canada.”
—Michel Auger, author of The Biker Who Shot Me: Recollections of a Crime Reporter