Do You Believe?: Conversations on God and Religion (Paperback) 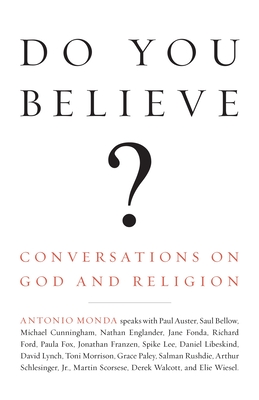 At a time when there is a notable lack of perspective in the public square regarding religion, Monda gives us a book demonstrating that some of America's most fascinating cultural figures are also people who've carefully & generously considered the challenge of faith, whether they themselves believe or not. Warning: interviews like Elie Wiesel's may be about enough to rip your heart!

Some of the most well-known and well-respected cultural figures of our time enter into intimate and illuminating conversation about their personal beliefs, about belief itself, about religion, and about God.

Antonio Monda is a disarming, rigorous interviewer, asking the most difficult questions (he often begins an interview point blank: “Do you believe in God?”) that lead to the most wide-ranging conversations. An ardent believer himself, Monda talks both with atheists (asked what she feels when she meets a believer, Grace Paley replies: “I respect his thinking and his beliefs, but at the same time I think he’s deluded”) and other believers, their discussion ranging from personal images of God (Michael Cunningham sees God as a black woman, Derek Walcott as a wise old white man with a beard) to religion’s place in American culture, from the afterlife to the concepts of good and evil, from fundamentalism to the Bible. And almost without fail, the conversations turn to questions of art and literature. Toni Morrison discusses Virginia Woolf and William Faulkner, Richard Ford invokes Wallace Stevens, and David Lynch draws attention to the religious aspects of Bu–uel, Fellini...and Harold Ramis's Groundhog Day.

Informal, revealing, unexpected, Do You Believe? is a captivating and thought-provoking meditation how faith, in all its facets, remains profoundly relevant for and in our culture.

Antonio Monda teaches in the Film and Television Department of New York University. An award winning filmmaker, he is author of A Journey into American Cinema, and editor/author of The Hidden God.

“When the Italian writer Antonio Monda sat down to talk religion with American cultural leaders...he went straight for the big questions.”
—O, The Oprah Magazine

“Deeply moving, Do You Believe? is a truly compelling book, bound to become a classic.”
—Commonweal

“As an interviewer, Monda has a light touch and a penchant for asking direct existential questions in the European manner: ‘Do you think images are replacing the written word?’ ‘Are you a pessimist or an optimist?’ ‘Comment on Dostoyevsky’s assertion that ‘If God doesn’t exist, everything is permitted.’ He’s a vivid exemplar of Italy’s baroque rhetorical culture, in which playfully meandering discussion is often prized over conclusions.”
—The New York Times Book Review

“In a series of short, informal conversations, NYU film professor Monda cuts to the heart of a question that not only provides the title for the book, but that he believes provides the key to existence.... The book should prove revelatory to believers and atheists alike, and to anyone interested in the ways in which spirituality informs art and culture.”
—Kirkus Reviews

“This is a thoughtful, provocative and concise volume.”
—Publishers Weekly

“The premise here is simple and straightforward. Cultural critic Monda asked some of the big names in popular culture variations on two basic questions: Do you think God exists? and How has your answer affected your life choices? The responses are often surprising, even quite startling.... Provocative and entertaining.”
—Booklist

“Entrancing from page one.... Each interview provides a wonderful insight into ideas that are widespread throughout the country.... This short collection is easy-to-read yet full of intellectual dialogue that will cause you to think if nothing else. I haven’t been so intrigued by a book since college, and intend to buy a copy of Do You Believe? for many of my friends and relatives for Christmas.”
—BookLoons.com

“Monda...proves himself an adventurous and risk-taking dialog partner.... The discussion sends an empowering message to those raising preliminary questions about faith and is a touchstone for well-traveled souls. Monda’s humble voice and his ability to engage interviewees in a dialog that is both insightful and sincere make this book especially accessible. He offers readers the beauty, excitement, and perplexity of the journey, giving them hope to work out their answers. ”
—Library Journal, starred review