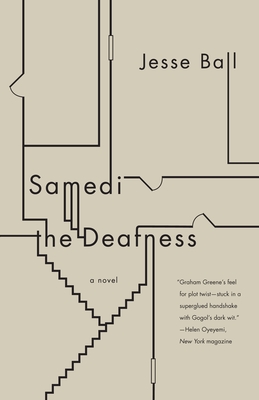 One morning in the park James Sim discovers a man, crumpled on the ground, stabbed in the chest. In the man's last breath, he whispers his confession: Samedi.

What follows is a spellbinding game of cat and mouse as James is abducted, brought to an asylum, and seduced by a woman in yellow. Who is lying? What is Samedi? And what will happen on the seventh day?

Jesse Ball (1978-) was born in Long Island, the second child of Robert and Catherine Ball. Educated at Vassar College and Columbia University, he has lived at times in Europe, and has worked as an editor, a croupier, a tutor, and a photographer. His first volume, March Book, appeared in 2004, followed by Vera & Linus (2006). His drawings were published in 2006 in Iceland in the volume Og svo kom nottin. Work of his has appeared in many major domestic and international journals, and was included in Best American Poetry 2006. Jesse Ball was a Spy but has Retired to the Country, a website, showcases much work of writing and drawing.

“A strange modern thriller--Kafka meets Hitchcock--laden with questions about truth, identity, memory, and the importance of names, a story that casts an unsettling spell.”
—Keith Donohue, author of The Stolen Child

“Like a tale by Lewis Carroll or a film by David Lynch, Samedi the Deafness teeters on the edge of unreality, plunges right in, and comes back again full circle. From its labyrinth of fictions, through the doubling and deceptive mirrors lining its walls and corridors, spills the eerie glow of some strange, ineffable truth.”
—Tom McCarthy, author of Remainder

“Samedi the Deafness is an urgent book . . . trying intently to tell us something about our world and our way of living, and it challenges us to listen. No serious reader can refuse this challenge.”
—Paul La Farge, author of Haussmann, or the Distinction