The Other (Vintage Contemporaries) (Paperback) 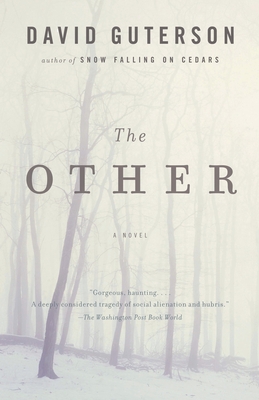 By David Guterson
$16.00
On our shelves now at one or more of our stores

“In The Other, David Guterson gives us an accurate and, now, haunting picture of a Seattle 30 years ago. Neil Countryman sees that life must evolve and grow into self-sufficiency even as he is inexorably tied to the wilderness he explored while coming of age. John William Barry chooses to reject his troubled, privileged life to find his way in the wilderness that has always been his home. Neither can foresee their ultimate futures.”
— Sarah Bass, Burlingham Books, Perry, NY

From the author of the bestselling Snow Falling on Cedars, a coming-of-age novel that presents two powerfully different visions of what it means to live a good life and the compromises that come with fulfillment.

John William Barry and Neil Countryman shared a love of the outdoors, trekking often into Washington's remote backcountry where they had to rely on their wits—and each other—to survive. Soon after graduating from college, Neil sets out on a path that will lead him toward a life as a devoted schoolteacher and family man. But John William makes a radically different choice, dropping out of college and moving deep into the woods. When he enlists Neil to help him disappear completely, Neil finds himself drawn into a web of agonizing responsibility, deceit, and tragedy—one that will finally break open with a wholly unexpected, life-altering revelation.

David Guterson is the author of five novels: Snow Falling on Cedars, which won the PEN/Faulkner and the American Booksellers Association Book of the Year Award; East of the Mountains; Our Lady of the Forest, a New York TimesNotable Book and a Los Angeles Times and Seattle Post- Intelligencer Best Book of the Year; The Other; and Ed King. He is also the author of a previous story collection,The Country Ahead of Us, the Country Behind; a poetry collection, Songs for a Summons; and two works of nonfiction, Family Matters: Why Homeschooling Makes Sense and Descent: A Memoir of Madness. The recipient of a Guggenheim Fellowship, he lives in Washington State.