The Girl with the Dragon Tattoo (Millennium Series #1) (Hardcover) 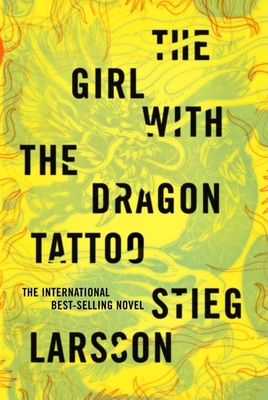 By Stieg Larsson, Reg Keeland (Translated by)
$35.00
Unavailable at this time.

This is book number 1 in the Millennium Series series.

“The Girl With the Dragon Tattoo is a fast-paced mystery with a compelling plot, and with even more compelling characters. I was totally hooked by this story, and Lisbeth Salander has quickly become one of my favorite characters. She's tough, independent, clever, and vulnerable all at once, and I loved following her through the twists and turns of this amazing book.”
— Elizabeth Jordan, Book People, Austin, TX

A sensation across Europe—millions of copies sold

It’s about the disappearance forty years ago of Harriet Vanger, a young scion of one of the wealthiest families in Sweden . . . and about her octogenarian uncle, determined to know the truth about what he believes was her murder.

It’s about Mikael Blomkvist, a crusading journalist recently at the wrong end of a libel case, hired to get to the bottom of Harriet’s disappearance . . . and about Lisbeth Salander, a twenty-four-year-old pierced and tattooed genius hacker possessed of the hard-earned wisdom of someone twice her age—and a terrifying capacity for ruthlessness to go with it—who assists Blomkvist with the investigation. This unlikely team discovers a vein of nearly unfathomable iniquity running through the Vanger family, astonishing corruption in the highest echelons of Swedish industrialism—and an unexpected connection between themselves.

It’s a contagiously exciting, stunningly intelligent novel about society at its most hidden, and about the intimate lives of a brilliantly realized cast of characters, all of them forced to face the darker aspects of their world and of their own lives.

Stieg Larsson, who lived in Sweden, was the editor in chief of the magazine Expo and a leading expert on antidemocratic right-wing extremist and Nazi organizations. He died in 2004, shortly after delivering the manuscript for this and two subsequent novels.

“An intelligent, ingeniously plotted, utterly engrossing thriller that is variously a serial-killer saga, a search for a missing person and an informed glimpse into the worlds of journalism and business . . . Lisbeth is a punk Watson to Mikael's dapper Holmes, and she's the coolest crime-fighting sidekick to come along in many years.”
–Washington Post

“An exceptional effort for a first-time crime novelist. In fact, a fine effort for any crime novelist . . . This book is meticulously plotted, beautifully paced, and features a cast of two indelible sleuths and many juicy suspects.”
–Boston Globe

“Combine the chilly Swedish backdrop and moody psychodrama of a Bergman movie with the grisly pyrotechnics of a serial-killer thriller, then add an angry punk heroine and a down-on-his-luck investigative journalist, and you have the ingredients of Stieg Larsson’s first novel.”
–Michiko Kakutani, The New York Times

“The book lands in the United States as Wall Street sputters and global markets clench, a timely fit to Larsson’s themes of corporate corruption. He tells his crime story cleverly, but the zing in Dragon Tattoo is inked in its two central characters.”
–Cleveland Plain Dealer

“A super-smart amalgam of the corporate corruption tale, legal thriller and dysfunctional-family psychological suspense story. It’s witty and unflinching . . . Larsson’s multi-pieced plot snaps together as neatly as an Ikea bookcase, but even more satisfying is the anti-social character of Salander.”
–Maureen Corrigan, Fresh Air (NPR)

“It’s like a blast of cold, fresh air to read The Girl With the Dragon Tattoo . . . It features at its center two unique and fascinating characters: a disgraced financial journalist and the absolutely marvelous 24-year-old Lisbeth Salander–a computer-hacking Pippi Longstocking with pierced eyebrows and a survival instinct that should scare anyone who gets in her way.”
–Chicago Tribune

“Larsson’s novel could serve as the definition of page-turner . . . The worst part: We have to wait until summer ’09 for the second installment.”
–Time Out New York

“Imagine the movies of Ingmar Bergman crossed with Thomas Harris’s novel The Silence of the Lambs. Larsson’s mesmerizing tale succeeds because, like P.D. James, he has written a why-dunit rather than a whodunit.”
–USA Today

“A whip-smart heroine and a hunky guy who needs her help? This sexy, addictive thriller is everything you never knew you could get from a crime novel.”
–Glamour

“Larsson’s debut thriller succeeds on so many levels it’s hard to know where to begin. First off, it’s an absolute page-turner. But the characters are so fascinating and the clear, understated writing so graceful, you are going to want to savor it . . . Electrifying.”
–Portsmouth Herald (NH)

“Is the hype justified? Yes . . . This complex, multilayered tale grabs the reader from the first page.”
–Library Journal (starred)

“The first U.S. appearance of another major Swedish crime writer is cause for celebration . . . The novel offers compelling chunks of investigative journalism, high-tech sleuthing, and psychosexual drama. What a shame that we only have three books in which to watch the charismatic Lisbeth Salander take on the world!”
–Booklist

“The Girl with the Dragon Tattoo is a striking novel. Just when I was thinking there wasn't anything new on the horizon, along comes Stieg Larsson with this wonderfully unique story. I was completely absorbed.”
–Michael Connelly

“I doubt you will read a better book this year.”
–Val McDermid

“Dark, labyrinthine, smart, sexy, utterly original, and completely captivating, Stieg Larsson’s The Girl with the Dragon Tattoo delights at every level. Nuanced, sympathetic characters, caught in a tangle of unusual and compelling relationships, grapple with a baffling family mystery and with their own demons in the unique literary environment of modern-day Sweden. This book is artful and grand entertainment. I couldn’t recommend it more highly.”
–John Lescroart

“So much more than a thriller, The Girl with the Dragon Tattoo is a dazzling novel of big ideas. It tackles issues of power, corruption, justice, and innocence–all the while drawing you into the twists and turns of a frighteningly suspenseful mystery.”
–Harlan Coben

“As vivid as bloodstains on snow.”
–Lee Child

“The Girl with the Dragon Tattoo is an utterly fresh political and journalistic thriller that is also intimate and moral. In spite of its dark unearthings Stieg Larsson has written a feast of a book, with central characters you will not forget.”
–Michael Ondaatje

“Cases rarely come much colder than the decades-old disappearance of teen heiress Harriet Vanger from her family’s remote island retreat north of Stockholm, nor do fiction debuts hotter than this European bestseller . . . At once a strikingly original thriller and a vivisection of Sweden’s dirty not-so-little secrets, this first of a trilogy introduces a provocatively odd couple.”
–Publishers Weekly (starred)

“What a cracking novel! I haven’t read such a stunning thriller debut for years. The way Larsson interweaves his two stories had me in thrall from beginning to end. Brilliantly written and totally gripping.”
–Minette Walters

“With its compelling situation, its complex plot and especially its unique, fully-realized characters, The Girl with the Dragon Tattoo embodies–in seamless translation–the best of European crime fiction.”
–S.J. Rozan

“The Girl With The Dragon Tattoo is a Tolstoyan re-invention of the ‘closed room’ murder mystery, Agatha Christie for adults. Curl up on the sofa with this masterwork of noir and let Stieg Larsson draw you into the shadows. It’s also a profound investigation into tribal violence in the world of high finance, and a revelation of the dark side of a country normally seen as the very height of propriety. By the end of the first chapter you will know better. By the end of the second you will be putty in his hands. Don’t even think about putting it down.”
–John Burdett

“Crime fiction has seldom needed to salute and mourn such a stellar talent as Larsson’s in the same breath.”
–The Sunday Times

“Larsson has up his sleeve two extremely engaging protagonists. Once these characters have appeared, our surrender to the novel is guaranteed . . . This is classic English mystery territory. But what follows is much darker and bloodier–more Thomas Harris than Dorothy L. Sayers.”
–The Independent

“The ballyhoo is fully justified . . . The novel scores on every front–character, story, atmosphere, and the translation.”
–The Times

“This is a striking novel, full of passion, an evocative sense of place and subtle insights into venal, corrupt minds . . . The journalist and the hacker are ingenious creations.”
–The Observer

“One of the greatest crime-fiction novels I have ever read . . . As mesmerizing as it is insightful . . . The Girl with the Dragon Tattoo is a multi-layered, multi-character tale by a writer of some considerable power. Full of social conscience and compassion, with insight into the nature of moral corruption, it knocked me out . . . Mikael Blomkvist and his partner, the enigmatic and deeply troubled Lisbeth Salander, will soon join the pantheon of greatest crime-fiction characters that populate the genre at its apex.”
–Shots Magazine

“A blockbuster story . . . The plot is interesting and credible but above all the heroine is splendidly original . . . An extraordinary book.”
–Literary Review