What Ever Happened to Modernism? (Hardcover) 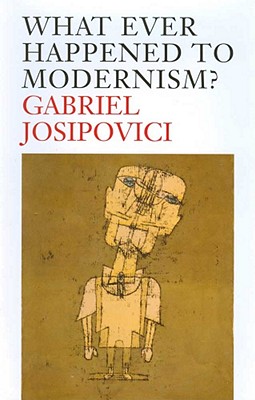 The quality of today's literary writing arouses the strongest opinions. For novelist and critic Gabriel Josipovici, the contemporary novel in English is profoundly disappointing a poor relation of its groundbreaking Modernist forebears. This agile and passionate book asks why.

Modernism, Josipovici suggests, is only superficially a reaction to industrialization or a revolution in diction and form; essentially, it is art coming to consciousness of its own limits and responsibilities. And its origins are to be sought not in 1850 or 1800, but in the early 1500s, with the crisis of society and perception that also led to the rise of Protestantism. With sophistication and persuasiveness, Josipovici charts some of Modernism's key stages, from Durer, Rabelais, and Cervantes to the present, bringing together a rich array of artists, musicians, and writers both familiar and unexpected including Beckett, Borges, Friedrich, Cezanne, Stevens, Robbe-Grillet, Beethoven, and Wordsworth. He concludes with a stinging attack on the current literary scene in Britain and America, which raises questions about not only national taste, but contemporary culture itself.

Gabriel Josipovici has spent a lifetime writing, and writing about other writers. What Ever Happened to Modernism? is a strident call to arms, and a tour de force of literary, artistic, and philosophical explication that will stimulate anyone interested in art in the twentieth century and today.

Gabriel Josipovici is a prolific and eminent novelist, literary theorist, critic, and scholar. He is currently research professor at the University of Sussex, where he taught in the School of European Studies for thirty-five years.

"[Josipovici's] approach does more justice to the complexity of Modernism than any capsule account could provide. And because Mr. Josipovici is himself an accomplished novelist, he knows how to craft a strong narrative. . . . The story he tells is unexpectedly compelling."—Eric Ormsby, Wall Street Journal
-Eric Ormsby

"An appealing literary-historical excursion . . . Quite engaging."—M. A. Orthofer, Complete Review
-M. A. Orthofer

"A measured and accessible polemic against contemporary culture. . . . What we have instead is a richer, broader and more exciting book than is signaled by the title. . . . This book is so alive. . . . An inspiring, sometimes electrifying, call to arms; a serious book for serious readers."—Ben Hamilton, The Millions
-Ben Hamilton

"Valuable . . . . You don't have to agree with all of Josipovici's demanding ideas about what it means to write fiction after modernism to be stimulated and provoked by this book."—Bill Marx, Arts Fuse
-Bill Marx

"An essential work that is highly readable and quotable. Those familiar with Josipovici's work with recognize that respect, and the humanity underlying. . . . His position is well articulated. . . . Hopefully future writers will regard this impressive and impassioned book as an invitation to engage openly with [Josipovici's] story and view of modernism."—Jeff Bursey, American Book Review
-Jeff Bursey

"The story he tells is unexpectedly compelling. . . . Mr. Josipovici has a gift for sweeping the reader along."—Eric Ormsby, The Wall Street Journal
-Eric Ormsby

"One of the pleasures of Gabriel Josipovici's Whatever Happened to Modernism? is that it all but forces us—dares us even—to argue with it. . . . Careful moderate critics are useful, bit it it the fiery, aggrieved ones who scale the highest intellectual heights, and Josipovici has scaled those heights with brio and panache."—Matthew Cheney, Rain Taxi
-Matthew Cheney