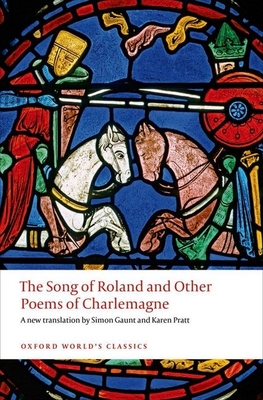 Charles the king, our emperor great,
Has been a full seven years in Spain.
As far as the sea he conquered this haughty land.
Not a single castle remains standing in his path Charlemagne (768-814) was crowned Holy Roman Emperor in 800 and presided over a huge empire. He frequently appears in literature as a great warlord and pious crusading figure. In 778, the rearguard of Charlemagne's retreating army was ambushed and defeated at the battle of Roncevaux. This became the
inspiration for songs and poems celebrating deeds of valour in the face of overwhelming odds, through the character of Charlemagne's nephew (the imaginary) Roland. The Song of Roland is the most stirring and moving epic poem of the European Middle Ages, offering a particularly heady mixture of
history, legend, and poetry. Presented here in a lively and idiomatic new translation, the Song of Roland offers fascinating insights into medieval ideas about heroism, manhood, religion, race, and nationhood which were foundational for modern European culture. The Song of Roland is accompanied here by two other medieval French
epics about Charlemagne, both of which show him to be a far more equivocal figure than that portrayed by the Roland: the Occitan Daurel and Beton, in which he is a corrupt and avaricious monarch; and the Journey of Charlemagne to Jerusalem and Constantinople, which gives the heroes of the Roland a
comic makeover. ABOUT THE SERIES: For over 100 years Oxford World's Classics has made available the widest range of literature from around the globe. Each affordable volume reflects Oxford's commitment to scholarship, providing the most accurate text plus a wealth of other valuable features, including expert
introductions by leading authorities, helpful notes to clarify the text, up-to-date bibliographies for further study, and much more.

Simon Gaunt taught in Cambridge for 10 years before taking up his current position at King's College London in 1998. He has been Head of Department and Dean of Faculty at King's, also President of the Society for French Studies. He was Principal Investigator on an AHRC-funded research project(http: //www.medievalfrancophone.ac.uk/) and is currently PI on an ERC-funded research project (https: //blogs.kcl.ac.uk/tvof/). Karen Pratt taught at Goldsmiths' College, University of London, until moving to King's College London in 1993. She has been President of the British branch of the International Courtly Literature Society, of the British Branch of the International Arthurian Society, and of the London MedievalSociety. She was one of the investigators on a HERA-funded collaborative research project: http: //dynamicsofthemedievalmanuscript.eu/