Watchdog: How Protecting Consumers Can Save Our Families, Our Economy, and Our Democracy (Hardcover) 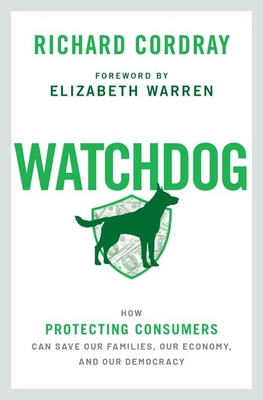 Every day across America, consumers face issues with credit cards, mortgages, car loans, and student loans. When they are cheated or mistreated, all too often they hit a brick wall against the financial companies. People are fed up with being run over by big corporations, and few have the resources or expertise to fight back on their own. It is no wonder consumers feel powerless: they are outgunned every step of the way. Since 1970, the financial industry has doubled in size. It is the biggest source of campaign contributions to federal candidates and parties, spending about $1 billion annually on campaigns and another $500 million on lobbying. The four biggest banks each now has more than $1 trillion in assets. Financial products have become a mass of fine print that consumers can hardly even read, let alone understand. Growing problems in the increasingly one-sided finance markets blew up the economy in 2008. In the aftermath, Congress created the Consumer Financial Protection Bureau. Sharing the stories of individual consumers, Watchdog shows how the Bureau quickly became a powerful force for good, suing big banks for cheating or deceiving consumers, putting limits on predatory lenders, simplifying mortgage paperwork, and stepping in to help solve problems raised by individual consumers. It tells a hopeful story of how our system can be reformed by putting government back on the side of the people, to strengthen our families, safeguard the marketplace, and establish a new baseline of fairness in our democratic society.

Richard Cordray served for six years as the first Director of the Consumer Financial Protection Bureau. Before joining the Consumer Bureau, Rich served as Ohio's Attorney General. He also served as Ohio Treasurer, where he led the State's banking, investment, debt, and financing activities. He previously taught at Ohio State's law school and served as a state legislator and as Ohio's first Solicitor General. Cordray has argued seven cases before the U.S. Supreme Court, including by special appointment of both the Clinton and Bush Justice Departments.