Switched on Pop: How Popular Music Works, and Why It Matters (Hardcover) 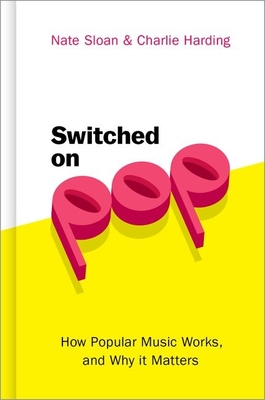 By Nate Sloan, Charlie Harding
$24.95
On our shelves now:

Pop music surrounds us - in our cars, over supermarket speakers, even when we are laid out at the dentist - but how often do we really hear what's playing? Switched on Pop is the book based on the eponymous podcast that has been hailed by NPR, Rolling Stone, The Guardian, and Entertainment Weekly for its witty and accessible analysis of Top 40 hits. Through close studies of sixteen modern classics, musicologist Nate Sloan and songwriter Charlie Harding shift pop from the background to the foreground, illuminating the essential musical concepts behind two decades of chart-topping songs. In 1939, Aaron Copland published What to Listen for in Music, the bestseller that made classical music approachable for generations of listeners. Eighty years later, Nate and Charlie update Copland's idea for a new audience and repertoire: 21st century pop, from Britney to Beyonc�, Outkast to Kendrick Lamar. Despite the importance of pop music in contemporary culture, most discourse only revolves around lyrics and celebrity. Switched on Pop gives readers the tools they need to interpret our modern soundtrack. Each chapter investigates a different song and artist, revealing musical insights such as how a single melodic motif follows Taylor Swift through every genre that she samples, Andr� 3000 uses metric manipulation to get listeners to "shake it like a Polaroid picture," or Luis Fonsi and Daddy Yankee create harmonic ambiguity in "Despacito" that mirrors the patterns of global migration. Replete with engaging discussions and eye-catching illustrations, Switched on Pop brings to life the musical qualities that catapult songs into the pop pantheon. Readers will find themselves listening to familiar tracks in new waysand not just those from the Top 40. The timeless concepts that Nate and Charlie define can be applied to any musical style. From fanatics to skeptics, teenagers to octogenarians, non-musicians to professional composers, every music lover will discover something ear-opening in Switched on Pop.

Nate Sloan and Charlie Harding are the co-hosts of Switched on Pop and longtime musical collaborators. Nate is Assistant Professor of Musicology at the University of Southern California. Charlie is Executive Producer of the show and a multi-instrumentalist and songwriter.