The Travelers: A Novel (CD-Audio) 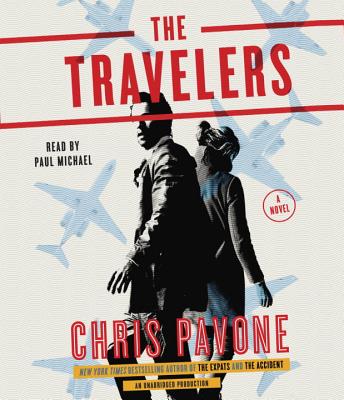 By Chris Pavone, Paul Michael (Read by)
Email or call for price.
Unavailable at this time.

“Full of twists and turns, secrets and lies, and enough misdirection to keep you guessing, Pavone's third novel delivers everything readers have come to expect from his thrillers. As in his previous work, the world of publishing takes a central role: This time it's a fading travel magazine and its companion travel agencies in the midst of an acquisition. Will and Chloe are a young married couple dealing with a home in need of extensive repairs so Chloe decides to take a less active role at Travelers magazine after Will is brought on board as the European correspondent. When Will meets an alluring woman while on assignment, she will change his life in ways he never could have foreseen.”
— Billie Bloebaum (E), A Children's Place, Portland, OR

Meet Will Rhodes: travel writer, recently married, barely solvent, his idealism rapidly giving way to disillusionment and the worry that he’s living the wrong life. Then one night, on assignment for the award-winning Travelers magazine in the wine region of Argentina, a beautiful woman makes him an offer he can’t refuse. Soon Will’s bad choices—and dark secrets—take him across Europe, from a chateau in Bordeaux to a midnight raid on a Paris mansion, from a dive bar in Dublin to a mega-yacht in the Mediterranean and an isolated cabin perched on the rugged cliffs of Iceland. As he’s drawn further into a tangled web of international intrigue, it becomes clear that nothing about Will Rhodes was ever ordinary, that the network of deception ensnaring him is part of an immense and deadly conspiracy with terrifying global implications—and that the people closest to him may pose the greatest threat of all.

CHRIS PAVONE is the New York Times bestselling author of The Expats and The Accident. He is the winner of the Edgar and Anthony awards for best first novel. He was a book editor for nearly two decades and lives in New York City with his family.

Praise for The Travelers:

"The Travelers does confirm what Mr. Pavone’s first two books have established: that when it comes to quick-witted, breathless thrillers that trot the globe, his are top-tier."
–Janet Maslin, New York Times

"A Hitchcockian thriller… [Pavone] brings on a full slate of characters, sharply etching their dress, their moves, their motives, all the while evoking the world they occupy."
–Washington Post

“Wit, suspense, great scenery, and a cast of dozens propel this well-paced escapade to its (literal) cliff-hanging conclusion; it’s like a “Spy vs. Spy” comic-strip done in 3-D.”
–Tom Nolan, Wall Street Journal

"Pavone continues his run of smart, elegant thrillers with The Travelers...written with wit and charm as well as satirical brio."
–The Guardian

"Pavone established himself as a highly adept weaver of complicated tales of deceit and danger with an international backdrop and a seemingly innocent central character. This latest is his most effective to date."
– Financial Times

“[N]obody brings the human aspect of the spy world into focus better than Pavone, and his stellar writing carries the day.”
–Associated Press

“Sneaky, insightful and surprising, Pavone's latest dazzles with its take on modern spycraft, with time for ruminations about the nature of work.”
– Cleveland Plain Dealer

“Another high-octane thriller…with chapters set in Dublin, Iceland, Mendoza and Paris that race along at dizzying speed, this book is all jet, no lag.”
–Virtuoso Life

“The Travelers moves at a brisk pace as Pavone ratchets up the action-packed suspense and infuses his plot with a rich view of far-flung exotic locales…With insight and a bit of wry humor, The Travelers will have readers wondering just what does he do all day?
–Oline Cogdill, South Florida Sun Sentinel

“Acclaimed thriller writer Chris Pavone seems to have another winner with “The Travelers,” a rock ’em-sock ’em adventure that takes readers from New York to exotic locales like Capri, Bordeaux, Paris, London, Argentina, Stockholm, Dublin, Edinburgh and Luxembourg before it comes to a climax in the boondocks of Iceland…The richly complicated plot keeps Rhodes (and readers) guessing until book’s end.”
–St. Louis Post Dispatch

“[One] of the most intelligent thrillers of the year. Engaging, complex, fully fleshed characters with believable backstories and narrative depth and elegance to go along with suspense and derring-do….”
–BOOKLIST, starred review

“Making subtle commentary in the midst of a beautifully executed thriller and without sacrificing pace has become something of trademark for Pavone, and here he opens the door on the shrinking print journalism industry...Pavone constantly misdirects readers' suspicions until the bloody, adrenaline-soaked conclusion, and his smart maneuvering makes having the rug pulled from under a missed guess almost as fun as getting one right…The hard-earned resolution leaves plenty of openings for the sequel fans will surely demand.”
–Jaclyn Fulwood, Shelf Awareness

“The Travelers combines Pavone’s trademark Swiss-watch plotting with warm and human characters caught up in a deadly scenario that gets plausibly and inevitably more dangerous as each page turns.  It’s hard to believe this is only Pavone’s third book – he’s already an automatic must-read for me.”
–LEE CHILD, author of the #1 New York Times bestseller Make Me

“I love Chris Pavone's writing, it's smart and elegant and brilliantly intertwines intrigue with menace.”
–PETER JAMES, International bestselling author of The House on Cold Hill