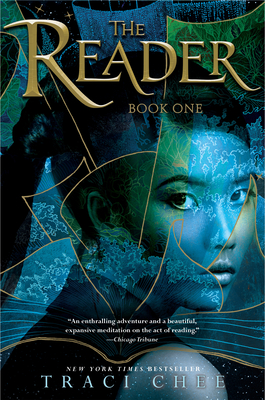 Can you imagine not knowing what a book is or looks like but somehow still understanding how powerful an object it is? Enter Sefia, whose father entrusted her with such a rectangular object before he was murdered. Then, her aunt gets kidnapped and Sefia begins to unlock the mysteries and magic of reading this book, which might be the only way to save her aunt and uncover the details behind her father's death. This self-reflexive read will leave you enthralled.

An instant New York Times Bestseller, this is a stunning debut set in a world where reading is unheard-of. Perfect for fans of Inkheart and Shadow and Bone

Finalist for the Kirkus Prize and nominated for the Goodreads Choice Award!

Sefia knows what it means to survive. After her father is brutally murdered, she flees into the wilderness with her aunt Nin, who teaches her to hunt, track, and steal. But when Nin is kidnapped, leaving Sefia completely alone, none of her survival skills can help her discover where Nin’s been taken, or if she’s even alive. The only clue to both her aunt’s disappearance and her father’s murder is the odd rectangular object her father left behind, an object she comes to realize is a book—a marvelous item unheard of in her otherwise illiterate society. With the help of this book, and the aid of a mysterious stranger with dark secrets of his own, Sefia sets out to rescue her aunt and find out what really happened the day her father was killed—and punish the people responsible.


"I was spellbound from the first page. An utterly transportive tale of swashbucklers and sharpshooters, masterfully written."—Renée Ahdieh, #1 New York Times bestselling author of The Wrath and the Dawn

"Traci Chee's The Reader Could Be The Next Big YA Fantasy Series"—Bustle.com

Traci Chee (tracichee.com) is an all-around word geek, she loves book arts and art books, poetry and paper crafts. She studied literature and creative writing at the University of California, Santa Cruz, and earned a master of arts degree from San Francisco State University. Traci grew up in a small town with more cows than people, and now feels most at home in the mountains, scaling switchbacks and happening upon hidden highland lakes. She lives in California with her fast-fast dog. The Reader is her YA debut.

Praise for The Reader:

★ “Commanding storytelling and vivid details, particularly of the magical process of reading, bring the story to life… the first of what promises to be an enchanting series.”—Kirkus Reviews, starred review

★ “Deftly rendered in beautiful prose, narrated through three shifting time lines woven into an interconnected history of duty, honor, and magic. . . . This is a must-have for all those who value a good read with genuine character growth, mystery, unique world-building, adventure, unyielding bonds of loyalty, and pirates. . . . A fresh, diverse fantasy; highly recommended for fans of Cornelia Funke’s Inkheart and female-powered adventures.”—School Library Journal, starred review

★ “Chee’s debut is an intricate, multilayered reading experience… An exploration of self-determination and the magic of the written word, Sefia’s story is an absorbing introduction to the Sea of Ink and Gold series.”—Publishers Weekly, starred review

★ “With evocative language, fascinating world building, multifaceted characters, and a compelling plot, this is a series fantasy lovers will want to sink their teeth into.”—Booklist, starred review

"The Reader weaves golden threads through land, sea and the fabric of time in a complex web of powerful magic and dangerous words."—Shelf Awareness

"Traci Chee's The Reader Could Be The Next Big YA Fantasy Series"—Bustle.com

“I was spellbound from the first page. An utterly transportive tale of swashbucklers and sharpshooters, masterfully written. Traci Chee has penned a beautiful novel about the power of story, complete with a fantastic cast of characters and an expertly rendered fantasy landscape. This is a book you will not soon forget.”—Renée Ahdieh, #1 New York Times bestselling author of The Wrath and the Dawn