Will Not Attend: Lively Stories of Detachment and Isolation (Paperback) 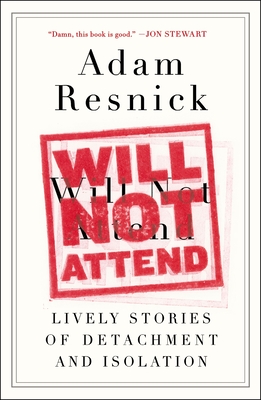 If one can turn lemons into lemonade, then I suppose one can turn tragedy into comedy. At least, that is what Adam Resnick has done with his childhood and it's related traumas. This is dark humor with an edge, that might have you cringing, but it will also have you laughing out loud at points.

“Damn, this book is good.”—Jon Stewart

“A biting, darkly hilarious collection of personal essays that begs to be read aloud.”—Chicago Tribune

Emmy Award–winning writer Adam Resnick began his career at Late Night with David Letterman before honing his chops in movies and cable television, including HBO’s The Larry Sanders Show. While courageously admitting to being “euphorically antisocial,” Resnick plunges readers deep into his troubled psyche in this uproarious memoir-in-essays. Shaped by such touchstone events as a traumatic Easter egg hunt and overwrought by obsessions, he refuses to be burdened by chores like basic social obligation and personal growth, adhering to his own steadfast rule: “I refuse to do anything I don’t want to do.”

Adam Resnick is an Emmy Award-winning writer who began his career at Late Night with David Letterman. He went on to co-create Fox’s Get a Life, starring Chris Elliott, and has written several screenplays, including cult favorites Cabin Boy and Death to Smoochy. Resnick has written for Saturday Night Live, was a co-executive producer and writer for HBO’s The Larry Sanders Show, and created the HBO series The High Life, which was produced by David Letterman’s company, Worldwide Pants. He is the author of Will Not Attend. He lives in New York City.

Praise for Will Not Attend

“Adam Resnick doesn't merely summon the jaundice and surprise of early David Sedaris, his mini memoirs are unpretentious reminders of John Updike's everyman absurdities and Richard Ford's bewildered strivers. A biting, darkly hilarious collection of personal essays that begs to be read aloud.”—Chicago Tribune (A Best Book of the Year, 2014)

“An anti-social work of art.”—RollingStone.com

“[A] dark, hilarious first book….Resnick is a guy thoroughly uncomfortable in his own skin, and he knows how to wring laughs and pathos out of that fact...[he] delivers his sad little histories with wit, insight and hilarious detail.  [Like] kindred spirits Louis C.K. and Larry David, he just wants the rest of the world to see how stupid it all is.”—Josh Modell, AV Club  (A Favorite Book of the Year, 2014)

“A streak of self-loathing runs through these stories with the anti-social Resnick repeatedly finding himself struggling through a humiliating or deeply irritating experience. However, that trenchant quality is occasionally undercut by an almost subliminal level of sweetness….Resnick’s cynical sensibilities are surprisingly raw and consistently hilarious....Will Not Attend could very well be one of the funniest books released this year.”—Splitsider

“The essays reveal the potty-mouthed, definitely not politically correct, and totally opinionated author at the top of his game. He takes on Disneyland and the Disney philosophy with gusto while on the side using a family trip to destroy the relationship with his sister-in-law. His take on junk food is priceless (“Only a narcissistic asshole would consider his body a temple”). Readers will relish this book. Buy plenty.”—Booklist

“The writing is sharp and sharp-tongued...the book is not for readers who are easily offended. The author’s aversion to just about everything paints him as nihilistic and cynical, but the subtle moments of genuine vulnerability remain the heart of every story. These moments prove redemptive for a character who sometimes feels beyond saving and shed light on how he developed such comically twisted viewpoints. A neurotic, unapologetic, hilarious collection.”—Kirkus

“Writing a collection of short stories is a very difficult thing to do. These Adam Resnick stories are great. You read one and think, that was so well done maybe I’ll read another. You think, the next one can’t be as good, and it’s even better. I hope you read this book. It’s funny, smart and thoughtful; and it’s funny, smart and thoughtful. I loved it. I think you will as well. Did I mention I loved it? Happy reading.”—Dave Letterman

“Having worked with Adam Resnick many years ago, I can easily recall he was a little nuts, but I completely forgot he was this talented and funny. Damn, this book is good.”—Jon Stewart

“Adam Resnick is one of the funniest writers I've ever known, and he proves it big-time in this acid-swaddled memoir.  You will laugh reading this book, I swear to Christ Almighty.  Adam comes by his misanthropy honestly and bravely—and his continued existence is a tribute to the soul-nourishing qualities of an unrelenting, unforgiving, and hilarious outlook. I will be reading this again and again for the rest of my life like it's the goddamn bible.”—Bob Odenkirk

“In the ideal film adaptation of Will Not Attend, second-grader Adam Resnick would be played by a four-foot-tall, fully adult homunculus Resnick, animated by a precocious despair, disdainful of cultural idiocy, and wearing the ever-present scowl of the perpetually put-upon. Undoubtedly, the child Resnick is father of the man Resnick. This is a very funny book, and I would pay decent money to see the movie version, or even to play it in the form of an extremely sad video game.”—Charlie Kaufman

“Adam Resnick is like an artist keenly observing the subtleties of light and shadow in the world around us—painting hilariously bleak portraits of the neighbors, friends, and family that we all know and love so dearly. He’s basically our generation’s Norman Rockwell, if Norman Rockwell had ever painted a woman sucking off a horse.”—Chris Elliott