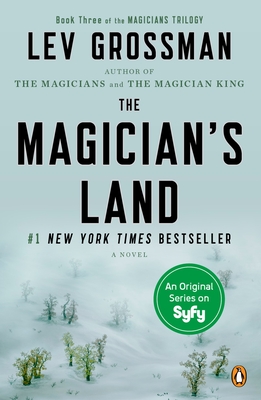 By Lev Grossman
$17.00
On our shelves now at one or more of our stores

This is book number 3 in the Magicians Trilogy series.

“In The Magician's Land, Quentin Coldwater is hitting 30 years old. It's a bit young to be having a mid-life crisis, but when you've been living your dreams as the magician king of a fantasyland and get suddenly deported by the very entities you have just saved from destruction, I suppose it's understandable. Grossman's quirky prose, his sense of humor, and his great sympathy for his emotionally flawed characters combine in this wonderful final novel in what has become one of my favorite fantasy trilogies ever.”
— Ken White, Books Inc., San Francisco, CA

A NEW YORK TIMES NOTABLE BOOK OF THE YEAR

Quentin Coldwater has been cast out of Fillory, the secret magical land of his childhood dreams. With nothing left to lose he returns to where his story began, the Brakebills Preparatory College of Magic. But he can’t hide from his past, and it’s not long before it comes looking for him.

Along with Plum, a brilliant young undergraduate with a dark secret of her own, Quentin sets out on a crooked path through a magical demimonde of gray magic and desperate characters. But all roads lead back to Fillory, and his new life takes him to old haunts, like Antarctica, and to buried secrets and old friends he thought were lost forever. He uncovers the key to a sorcery masterwork, a spell that could create magical utopia, a new Fillory—but casting it will set in motion a chain of events that will bring Earth and Fillory crashing together. To save them he will have to risk sacrificing everything.

The Magician’s Land is an intricate thriller, a fantastical epic, and an epic of love and redemption that brings the Magicians trilogy to a magnificent conclusion, confirming it as one of the great achievements in modern fantasy. It’s the story of a boy becoming a man, an apprentice becoming a master, and a broken land finally becoming whole.

LEV GROSSMAN is the book critic for Time magazine and the author of five novels, including the international bestseller Codex and the #1 New York Times bestselling Magicians trilogy. He lives in Brooklyn with his wife and three children.

“Richly imagined and continually surprising. . . . The strongest book in Grossman’s series. It not only offers a satisfying conclusion to Quentin Coldwater’s quests, earthly and otherwise, but also considers complex questions about identity and selfhood as profound as they are entertaining. . . . The Magician’s Land, more than any other book in the trilogy, wrestles with the question of humanity. . . . This is a gifted writer, and his gifts are at their apex in The Magician’s Land.”
—Edan Lepucki, The New York Times Book Review

“The strength of the trilogy lies . . . in the characters, whose inner lives and frailties Grossman renders with care and empathy. . . . Quentin[’s] . . . magical journey is deeply human.”
—The New Yorker

“[A] wonderful trilogy. . . . If the Narnia books were like catnip for a certain kind of kid, these books are like crack for a certain kind of adult. . . . Brakebills graduates can have a hard time adjusting to life outside, though some distract themselves by lazily meddling in world affairs (e.g., the election of 2000). Readers of Mr. Grossman’s mesmerizing trilogy might experience the same kind of withdrawal upon finishing The Magician’s Land. Short of wishing that a fourth book could suddenly appear by magic, there’s not much we can do about it.”
—Sarah Lyall, The New York Times

“Grossman makes it clear in the deepening complexity and widening scope of each volume that he understands the pleasures and perils of stories and believing in them. . . . The Magician's Land triumphantly answers the essential questions at the heart of the series, about whether magic belongs to childhood alone, whether reality trumps fantasy, even whether we have the power to shape our own lives in an indifferent universe.”
—Gwenda Bond, The Los Angeles Times

“A wholly satisfying and stirring conclusion to this weird and wonderful tale. . . . Relentlessly subversive and inventive. . . . Grossman can . . . write like a magician. . . . [He] reminds us that good writing can beguile the senses, imagination and intellect. The door at the back of the book is still there, and we can go back to those magical lands, older and wiser, eager for the re-enchantment.”
—Keith Donohue, The Washington Post

“A huge part of the pleasure of this trilogy in general and this volume in particular is that, even as we consume the story just to find out what happens to Quentin, we know that we are collaborating in our own versions of its creation, its animation. The reader gets to be a magician, too.”
—Nancy Klingener, The Miami Herald

“The Magician’s Land . . . does all the things you want in a third book: winding up everyone's stories, tying up the loose ends -- and giving you a bit more than you bargained for. . . . Starting very early in Magician's Land, Grossman kicks off a series of escalating magical battles, each more fantastic, taut, and brutal than the last, which comes to a head in the final chapters with a world-shattering Götterdämmerung scene that stands with great war at the climax of The Return of the King. At the same time, Grossman never loses sight of the idea of magic as unknowable and unsystematized, a thread of Borgesian Big Weird that culminates in a beautiful tribute to Borges himself. It's this welding together of adventure-fiction plotstuff and introspective, moody characterization that makes this book, and the trilogy it concludes, so worthy of your reading time, and your re-reading time.
—Cory Doctorow, Boing Boing

“The world of Grossman's ‘Magicians’ series is arrestingly original, joyful and messy. It's so vividly rendered that it's almost disappointing to remember that it doesn't, after all, exist. The overall effect is — well, there's really only one word for it: It's magical.”
—Chicago Tribune

“[A] satisfying ending to the series. . . . Saying goodbye to Quentin is bittersweet, but saying goodbye to a Quentin who achieves some peace at last fills the farewell with a reassuring optimism for his future.”
—The Boston Globe

“An enchanting conclusion . . . to a series that references C.S. Lewis and J.K. Rowling while remaining refreshingly original. . . . The Magician’s Land is that rare novel that looks at what happens after the child prodigy grows up and has to get a job. . . . [It] features the return of a character sorely missed by both Quentin and readers alike, as well as Grossman’s trademark witty dialogue.”
—The Christian Science Monitor

“The last (and IOHO, best) book in the hit Magicians trilogy. Savor every word.”
—Cosmopolitan

“A satisfying finale to the series, while adding depth and shading to the world. . . . Grossman tells exciting fantasy adventures, but at the same time deconstructs the fantasy, as his characters discover that even magical wish-fulfillment is no guarantee of happiness, and even a job casting spells in a magical land is still work.”
—A.V. Club (A-)

“When read straight through, the Magicians trilogy reveals its lovely shape. The world of the books wraps around itself, exposing most everything necessary by its conclusion, but occluding operations that we'll never need to see. There's still a series of mysteries and untold tales left unknown deep inside the books.”
—Choire Sicha, The Slate Book Review

“All lovers of Lev Grossman’s first two books of The Magicians trilogy: This is the end, beautiful friend. . . . One of the lovely things about this series is watching Quentin evolve from depressed teen to clear-eyed man. If Grossman raises his kids with the same sympathy with which he parents his literary teen, he’ll be a smashing success. . . . Battle scenes are laid out with vivid, near-storyboard detail. There’s so much excitement as to make the temptation to race ahead a serious danger. . . . Grossman brings the story home on a very satisfying chord. The chorus: We are all magicians. Life, like magic, gives back only as much as you put into it. It takes hard work, it hurts, and you have to be ready to fail. But deep within us all lies the power to enchant the world.”
—Cindy Bagwell, Dallas Morning News

“So you’ve torn through all the volumes of A Song of Ice and Fire (aka Game of Thrones), and you’re a little over the whole dystopian young-adult thing. What’s an adventure-minded reader to do for a fat beach book this August? Look no further than Lev Grossman’s Magicians trilogy.”
—Sara Stewart, The New York Post

“The very satisfying final book in [Grossman’s] trilogy. . . . This third book, at turns a heist story, a meditation on the act of creation, and an apocalyptic disaster tale, continues the adventures of main character Quentin Coldwater. It mixes genre deconstruction with psychological realism, full of self-aware figures who are cognizant of all the tropes of fantasy fiction, while at the same time working to fulfill those tropes or push against them. There are great swaths of high imagination in The Magician's Land, evocative passages that contain entire worlds. Writing, like magic, is a craft, and Grossman performs it oh so well.”
—Gilbert Cruz, NY1

“In the smash trilogy’s thrilling end, Quentin is cast out of Fillory, the enchanted realm he once ruled. But he’ll risk his life (and make dangerous allies) to save the threatened world.”
—US Weekly

“[A] deeply satisfying finale . . . [Grossman’s] characters’ magical battles have a bravura all their own. . . . The essence of being a magician, as Quentin learns to define it, could easily serve as a thumbnail description of Grossman’s art: ‘the power to enchant the world.’”
—Kirkus Reviews (starred review)

“[The Magicians] series taken as a whole brings new life and energy to the fantasy genre. The final volume will please fans looking for action, emotion, and, ultimately, closure.”
—Library Journal

“An elegantly written third act to Quentin’s bildungsroman. . . . Fans of the trilogy will be pleased.”
—Publishers Weekly

“If you haven’t read the first two books in Grossman’s Magicians trilogy, buy them immediately and set aside a weekend to read them straight through before you turn to The Magician’s Land. The series, which follows a group of—you guessed it—magicians through the emotional foibles of young adulthood has been called ‘Harry Potter for adults.’ But it’s way more complex than that. Grossman hones in on the particularly brutal business of being young, and then adds layer upon layer of literary allusion, creating works that are both homages to fantasy’s past and glimpses at its future.”
—The New Republic

“Sink your mobile devices into the nearest wishing well and duct-tape your front door against gnomes, pollsters, and other distractions. The Magician’s Land is beckoning, and demands your full attention. Lev Grossman proves again that the costs and consolations of creation—both of Fillory and of this conclusion to his trilogy—are mighty forces. Quentin Coldwater, Grossman's Orpheus and his Abraham, his Yahweh and his Puck, enchants as few other magicians can, or dare.”
—Gregory Maguire, author of Wicked and Egg & Spoon

“Lev Grossman has conjured a rare creature: a trilogy that simply gets better and better as it goes along. The Magician's Land is sumptuous and surprising yet deliciously familiar, a glass of rich red wine left out for a hungry ghost. Literary perfection for those of us who grew up testing the structural integrity of the backs of wardrobes.”
—Erin Morgenstern, author of The Night Circus

“The Magician's Land is a triumphant climax to the best fantasy trilogy of the decade.”
—Charles Stross

“Poignant and messy, fearsome and beautiful—like a good magic spell, the final book in this trilogy is more than the sum of its parts. Also, damn. Just some of the best magic I have read, ever.”
—Maggie Stiefvater