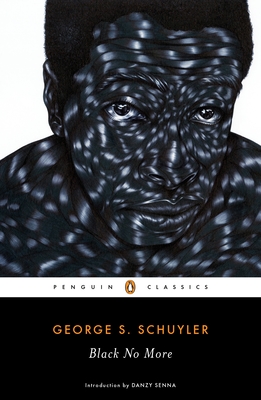 George Schuyler's Black No More is, above all, deeply funny. It can be read as political allegory, or social satire, or racial commentary, but Schuyler (a pioneering African-American journalist) set out to, and succeeded at, writing a book that is wickedly, mordantly funny. Set primarily in Harlem and Atlanta in the 1930s, Schuyler imagines a technology that allows black people to remove pigmentation from their skin and become white. Of course, this turns the American political system on its head, and reveals the fallacy behind the popular conception of 'whiteness'.

This book was written during the Harlem Renaissance in 1931, but the aim of its critique is just as germane today, and echoed in films like Get Out and Sorry to Bother You. Part Afrofuturism, part satire, this novel lampoons both the KKK and the NAACP. It highlights the biological artificiality of race, while also making clear the very real ways it acts as a social force. Mostly, this book is hilarious.

Soon to be a Broadway musical! With a book by John Ridley, music by Tariq Trotter, and choreography by Bill T. Jones

The landmark comic satire that asks, “What would happen if all black people in America turned white?”

It’s New Year’s Day 1933 in New York City, and Max Disher, a young black man, has just found out that a certain Dr. Junius Crookman has discovered a mysterious process that allows people to bleach their skin white—a new way to “solve the American race problem.” Max leaps at the opportunity, and after a brief stay at the Crookman Sanitarium, he becomes Matthew Fisher, a white man who is able to attain everything he has ever wanted: money, power, good liquor, and the white woman who rejected him when he was black.

Lampooning myths of white supremacy and racial purity and caricaturing prominent African American leaders like W. E. B. Du Bois, Madam C. J. Walker, and Marcus Garvey, Black No More is a masterwork of speculative fiction and a hilarious satire of America’s obsession with race.

For more than seventy years, Penguin has been the leading publisher of classic literature in the English-speaking world. With more than 1,800 titles, Penguin Classics represents a global bookshelf of the best works throughout history and across genres and disciplines. Readers trust the series to provide authoritative texts enhanced by introductions and notes by distinguished scholars and contemporary authors, as well as up-to-date translations by award-winning translators.

George S. Schuyler (1895–1977), a satirist, critic, and eminent African American journalist of the Harlem Renaissance, was born in Providence, Rhode Island. After a seven-year stint in the army, he moved to New York City, where he joined the staff of The Messenger, the official magazine of the Friends of Negro Freedom, a black socialist group. His writing for The Messenger caught the eye of H. L. Mencken, who became a mentor figure to Schuyler; Schuyler soon began writing for Mencken’s The American Mercury, as well as The Nation, The Washington Post, and the Pittsburgh Courier, black America’s most influential newspaper. He became the first black journalist to attain national prominence and was known for his controversial opinions. In addition to Black No More, Schuyler published the novel Slaves Today as well as several novellas and an autobiography.

Danzy Senna (introduction) is the author of the novels New People, Symptomatic, and Caucasia, a national bestseller that won the Stephen Crane Award for Best New Fiction and the American Library Association’s Alex Award and was translated into nearly a dozen languages. A recipient of the Whiting Writers Award, Senna is also the author of the memoir Where Did You Sleep Last Night? and the story collection You Are Free. She lives in Los Angeles, where she is a professor of English at the University of Southern California.

“A liberating and lacerating critique of American racial madness, capitalism, and white superiority . . . In the era of Trump and Rachel Dolezal, Beyonce’s ‘Formation’ and that radical Pepsi commercial starring Kendall Jenner, of the rise and fall of Tiger Woods’ land of Cablinasia, and of Michael Jackson’s ‘race lift’ and subsequent death, Schuyler’s wild, misanthropic, take-no-prisoners satire of American life seems more relevant than ever.” —Danzy Senna, from the Introduction

“No one is safe from Schuyler’s biting mockery. . . . Each page unleashes a fusillade of gags and comic sequences, careening from slapstick to blood bath and back again. . . . To borrow a line from Schuyler, the plot twists get ‘more complicated than a flapper’s past’—and about as fun. . . . [Black No More is] unsparing on the madness of racial classification but frank, and very beautiful, on the lure of racial belonging.” —The New York Times

“Very satirical . . . It reminds me in some ways . . . of Paul Beatty’s The Sellout, which . . . has no sacred cows and is also very funny and cutting.” —John Williams, The New York Times Book Review (podcast)

“Black No More holds a cynical mirror up to its time, but has plenty to say to our world, too. . . . Schuyler’s mockery spares no one.” —Milwaukee Journal Sentinel