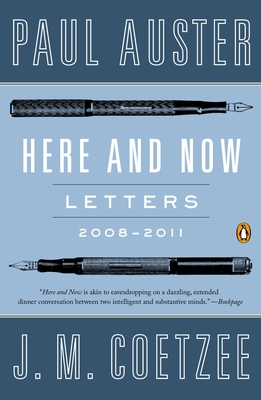 “[A] civilized discourse between two cultivated and sophisticated men. . . . It’s a pleasure to be in their company.” —Michael Dirda, The Washington Post

J.M. Coetzee's latest novel, The Schooldays of Jesus, is now available from Viking. Late Essays: 2006-2016 will be available January 2018.

After a meeting at an Australian literary festival brought them together in 2008, novelists Paul Auster and J. M. Coetzee began exchanging letters on a regular basis with the hope they might “strike sparks off each other." Here and Now is the result: a three-year epistolary dialogue that touches on nearly every subject, from sports to fatherhood, literature to film, philosophy to politics, from the financial crisis to art, death, eroticism, marriage, friendship, and love. Their high-spirited and luminous correspondence offers an intimate and often amusing portrait of these two men as they explore the complexities of the here and now and reveal their pleasure in each other’s friendship on every page.

Paul Auster is the New York Times bestselling author of The New York Trilogy, The Brooklyn Follies, Sunset Park, Winter Journal, and many other critically acclaimed books. He lives in Brooklyn, New York.

J. M. Coetzee is the first author to be awarded the Booker Prize twice. The author of Disgrace and Life & Times of Michael K, among many other works, he was awarded the Nobel Prize for Literature in 2003. He lives in Adelaide, Australia.

“[A] civilized discourse between two cultivated and sophisticated men…A pleasure to be in their company.”—Michael Dirda, The Washington Post.

“These two famous writers might seem at first an unlikely pairing…[but] as a series of collaborative inquiries and an extended meditation on the processes of friendship, the book has something substantive to offer.”—The New York Times Book Review

"Here and Now is akin to eavesdropping on a dazzling, extended dinner conversation between two intelligent and substantive minds... A very appealing, human portrait of these two writers."—Bookpage

“What keeps us reading is not the brilliance of the minds – though that feature is generously on offer as well – but the warmth, unpretentiousness, and honesty that emerges from these pages…An invigorating and deeply engaging look at two literary greats, as we’ve never seen them before.”—thestar.com

“A striking portrait of two great friends…the result of Auster and Coetzee’s exchange is nothing short of witty, sharp and thought-provoking, and offers a fascinating look into the minds of two of the 20th century’s greatest writers.”—Malibu Magazine

“Many, this reviewer among them, would consider [Coetzee] the greatest living novelist in English.” —The New York Times Book Review

"Coetzee may turn out to be one of the last great novelists, exalted by the intensity of his self-awareness and his willingness to make his home in a spiritual and intellectual impasse of which few of his contemporaries were even aware."--The Nation

“South Africa’s most brilliant novelist . . . challenges us to doubt our preconceived notions not only of love but of truth itself.” —The Seattle Times

“A writer of lean, genre-tinged novels whose unaffected prose belies their philosophical complexity….He's also one of our most playful novelists, a lover of narrative labyrinths on par with Borges, to whom he has often been compared.”—The Washington Post

"Paul Auster is one of those sages with confounding talent—confounding for one because he's simply that good... He belongs among Vonnegut, Roth, and DeLillo.”—The Daily Beast