The Secret Rooms: A True Story of a Haunted Castle, a Plotting Duchess, and a Family Secret (Paperback) 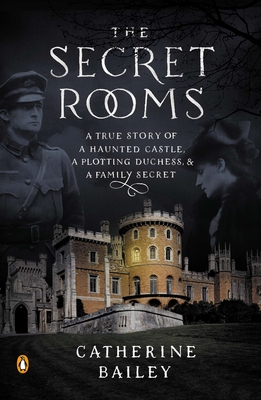 For fans of Downton Abbey, this New York Times bestseller is the enthralling true story of family secrets and aristocratic intrigue in the days before WWI

After the Ninth Duke of Rutland, one of the wealthiest men in Britain, died alone in a cramped room in the servants’ quarters of Belvoir Castle on April 21, 1940, his son and heir ordered the room, which contained the Rutland family archives, sealed. Sixty years later, Catherine Bailey became the first historian given access. What she discovered was a mystery: The Duke had painstakingly erased three periods of his life from all family records—but why? As Bailey uncovers the answers, she also provides an intimate portrait of the very top of British society in the turbulent days leading up to World War I.

Catherine Bailey read history at Oxford University and is an award-winning television producer and director, making a range of critically acclaimed documentary films inspired by her interest in twentieth century history. She is the author of the New York Times bestseller The Secret Rooms and Black Diamonds. She lives in West London.

“With gripping detail and graceful prose…Bailey’s work can best be described as a work of probative history written with the storytelling skills of a latter-day Agatha Christie.” – The Richmond Times-Dispatch

“Populated with a bevy of real-life aristos who played by their own twisted and privileged set of rules, a searing portrait of family intrigue, dysfunction, and hubris—a la Downton Abbey—emerges.” – Booklist

“Bailey deserves commendation for her meticulous research as well as her storytelling.” – Publisher’s Weekly

“Gripping. Reads like the best kind of mystery story. It is a tale of mistresses and heirlooms, cowardice and connivance.” – The Sunday Times (London)

“Compelling. A remarkable piece of research which throws a bright shaft of light on powerful people, hypocrisy and the First World War.” – The Guardian