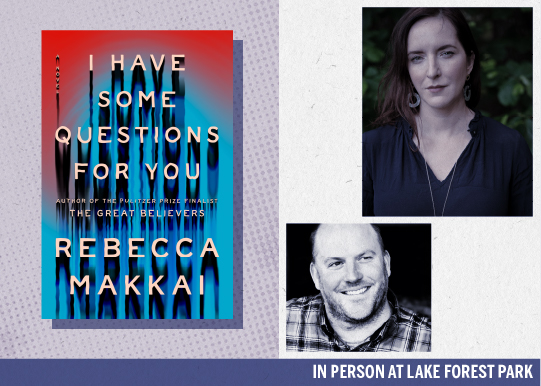 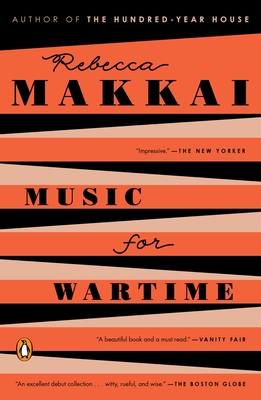 Named a must-read by the Chicago Tribune, O Magazine, BuzzFeed, The Huffington Post, Minneapolis Star-Tribune, and The L Magazine

Rebecca Makkai’s first two novels, The Borrower and The Hundred-Year House, have established her as one of the freshest and most imaginative voices in fiction. Now, the award-winning writer, whose stories have appeared in four consecutive editions of The Best American Short Stories, returns with a highly anticipated collection bearing her signature mix of intelligence, wit, and heart.

A reality show producer manipulates two contestants into falling in love, even as her own relationship falls apart. Just after the fall of the Berlin Wall, a young boy has a revelation about his father’s past when a renowned Romanian violinist plays a concert in their home. When the prized elephant of a traveling circus keels over dead, the small-town minister tasked with burying its remains comes to question his own faith. In an unnamed country, a composer records the folk songs of two women from a village on the brink of destruction.

These transporting, deeply moving stories—some inspired by her own family history—amply demonstrate Makkai’s extraordinary range as a storyteller, and confirm her as a master of the short story form.

Rebecca Makkai is the author of the novels The Great Believers, The Hundred-Year House, and The Borrower, as well as the short story collection Music for Wartime. The Great Believers was a finalist for the Pulitzer Prize and the National Book Award, and received the ALA Carnegie Medal and the LA Times Book Prize, among other honors. Makkai is on the MFA faculties of Sierra Nevada College and Northwestern University, and she is Artistic Director of StoryStudio Chicago.

“Ricocheting from the war-torn twentieth century to the reality-show-rich present day, the stories in this impressive collection feature characters buffeted by fate—or is it mere happenstance? . . . Our sense of history is probed, too, not without humor.”
—The New Yorker

“It’s impossible to resist the spell this collection’s 17 stories weave. Wide in range and deep in feeling, Music for Wartime further confirms what The Hundred-Year House made clear: Rebecca Makkai is a writer of the first order, a writer whose name deserves to become well known among all discerning readers of fiction.”
—The Philadelphia Inquirer

“[Makkai’s] stories were anthologized in The Best American Short Stories for four years in a row, and Music for Wartime proves these honors were well-deserved, highlighting her poised voice, willingness to experiment, deft hand at structure, and capacity to surprise… Makkai brilliantly demonstrates that art can never be merely tangential to the lives of people who care about it.”
—Dallas Morning News

“[An] excellent debut collection of stories . . . characterized by a striking blend of whimsy and poignancy, elegy and ebullience . . . [that] demonstrate an impressive range. . . . While some stories are straightforwardly realistic and others wildly fantastical, all are witty, rueful and wise. . . . I look forward with great anticipation . . . to anything else this immensely gifted writer produces.”
—Priscilla Gilman, The Boston Globe

“A beautiful book and a must-read . . . Rebecca Makkai is a rising literary star, whose short stories appeared just about everywhere, before she turned to writing novels. So this is an exciting and exceptional return to the short story for Makkai, and for all of us.”
—Vanity Fair

“[Makkai’s] writing about music is informed and inquisitive. . . . ‘Playful and crisp and strangely elfin’ are words I would use to describe my favorite story in this book . . . [which] is about a reality television producer. . . . Ms. Makkai is shrewd about the unpretty manner in which reality TV is made . . . [and] the heartbreak in this story feels particular, grainy: real. . . . It’s a gut-punch that lands.”
—Dwight Garner, The New York Times

"Engrossing."
—Minneapolis Star-Tribune, “Summer books: 10 novels not to miss — and so much more”

“Exceptional . . . [Makkai] writes with economic precision, excising extraneous details or extra commas; she designs a catalog of unique structures to convey her meanings; and she narrates with unflagging confidence, secure in her experimentations and digressions. . . . Provocative, compelling reading.”
—Cleveland Plain-Dealer

“ ‘The Briefcase' . . . is a story that displays remarkable compression, force and agility, and is also one of the very few I’ve read that would fit just as snugly into Kafka’s oeuvre as it would into Amy Hempel’s or Joy Williams’.”
—Kevin Brockmeier in The Arkansas Times

“The short story is the ideal venue for Makkai’s considerable talent, not only for drawing nuanced characterizations, but for contriving strange and fascinating premises. . . . With Music for Wartime, Makkai takes her place – one she deserves – among the artists with aplomb.”
—The Guardian

“[Makkai’s] stories are united by . . . a penetrating streak of psychological acuity and insight. . . . the 17 stories in the volume—a remarkably heterodox group, varied in terms of subject and approach—were written over the course of 13 years, and it shows: Evident patience and care have been taken with these stories to tease out their meaning and emotion while retaining an admirable subtlety and suggestiveness. . . . Makkai is unafraid to inject uncanny or curious elements into her narratives. . . . [She] finds her power in uniqueness and individuality.”
—Globe and Mail (Canada)

“This varied collection of short stories focuses on finding beauty in the darkest times. . . . These tales will delight and haunt you long after you have closed the book.”
—Woman's Day

“The stories are haunting and enchanting, wonderfully strange, and unforgettably gorgeous.”
—Book Riot (The Best Books of 2015 So Far)

“Makkai’s Lorrie Moore-esque genius for floating bizarre and often very funny ideas land[s] with gravitas. . . . The lines between fiction and non-fiction feel inconsequential when the subject is the human condition, and when the stories are told so well.”
—The Winnipeg Free Press

“Quintessential Makkai—witty, intelligent, a little irreverent, but not afraid to venture into emotional territory.”
—Bookpage

“If any short story writer can be considered a rock star of the genre, it’s Rebecca Makkai…. Her greatest strength may be never forgetting that she is a storyteller first.”
—Kansas City Star

“Nearly perfect . . . [Makkai] has penned a collection filled with beauty and heartbreak, surprise and wonder, guilt and innocence. . . . The stories complement one another perfectly, linked not by characters or plot, but by theme and craft. . . . An exceptional book.”
—The Gazette (Iowa City)

“Music for Wartime shows off Rebecca Makkai’s surprising range of short-story writing: Stories of war and destruction appear next to those about love and reality television. Yet the collection still manages to feel like a cohesive, stunning whole, tied together with the wit and heart that courses through each and every story.”
—Buzzfeed, “17 Awesome New Books You Need To Read This Summer”

“Makkai proved in her most recent novel, The Hundred-Year House, that she's capable of crafting alluring, interwoven character studies. In Music for Wartime, she's penned a series of short stories—three of which are based on legends from Hungary, where her family hails from. Spanning Berlin, Romania and present-day America, where true love can be found in front of a live audience, her short stories are as moving as they are varied."
—The Huffington Post, “18 Brilliant Books You Won't Want To Miss This Summer”

“Haunting . . . Seventeen stories with the impact of a quiver of arrows aimed at the heart.”
—BBC.com, “Ten Books to Read in July”

“Stories that stay with you, all of which are good, and some of which are magnificent….The writing is clever and rich with the perceptiveness and human insight that earned Makkai a place (or four) in the Best American Short Stories series.”
—Los Angeles Magazine, “7 Books You Need to Read This July”

“Makkai’s first short story collection demonstrates why the already-acclaimed novelist is also a master of this more succinct form. Each of the stories in the collection is vividly wrought and individually compelling, and features a precision and beauty that leaves the reader full of wonder.”
—The L Magazine, “50 Books You’ll Want to Read This Spring and Summer”

“After two celebrated novels . . . Makkai returns to the genre that first got her noticed. The stories’ settings vary . . . [with the] author’s sharp, compassionate writing uniting them all."
—Chicago Magazine, “Grab These 10 Great Summer Reads”

“Showcases the author’s talent for the short form.”
—The Millions, “Most Anticipated: The Great First-Half 2015 Book Preview”

“Rife with sentences that will stop you in your tracks with their strangeness and profundity….Makkai is a musical writer with a strong voice.”
—Library Journal, (Starred Review)

“[An] outstanding debut story collection . . . Though these stories alternate in time between WWII and the present day, they all are set . . . within ‘the borders of the human heart’—a terrain that their author maps uncommonly well.”
—Publishers Weekly (Starred Review)

“A collection of 17 nuanced short stories which examine conflicts internal and external involving the touchstones of family, artistry, and identity. . . . Makkai’s tales offer rich explorations of the key questions and struggles that are part and parcel of the human experience.”
—Booklist

“Rebecca Makkai is one of our best writers—witty and precise, brilliant and compassionate—and every one of these stories contains all the depth and heartache of a doorstop-sized novel. I’ve been waiting for years for this book. Music for Wartime isn’t simply wonderful—it’s essential.”
—Molly Antopol, author of The Un-Americans, longlisted for the National Book Award

“I have been waiting for this collection since 2008, when I read “The Worst You Ever Feel” and it basically took the top of my head off. Deeply intelligent, stylistically playful, full of razor wit and grave historical accounting, what is most enthralling about these stories is their insistence that the political and the personal are never separate categories, that art’s attempt to make sense of the senseless is at least as noble as it is doomed, and that atrocities large and small begin, as love does, in the human heart.”
—Pam Houston, author of Contents May Have Shifted

“It’s not often you read a story collection with the range and depth of Rebecca Makkai’s Music for Wartime. The stories are about war and guilt and secrets, but also about romance and art and reality TV, and they come together, as the best collections do, as an assured and satisfying whole. It’s a wonderful book, haunting, funny, and wise.”
—Maile Meloy, author of Both Ways Is the Only Way I Want It

“Rebecca Makkai’s Music for Wartime is a collection of the first order. The stories diverge and coalesce, practically in conversation with one another, always hewing to the varied consolations of beauty in the midst of conflict. To read one is to crave the next, each story feeding a pang you didn’t quite know you had. Music for Wartime isn’t a song, it’s a sublime double-LP.”
—Smith Henderson, author of Fourth of July Creek