The Great Leader and the Fighter Pilot: A True Story About the Birth of Tyranny in North Korea (Paperback) 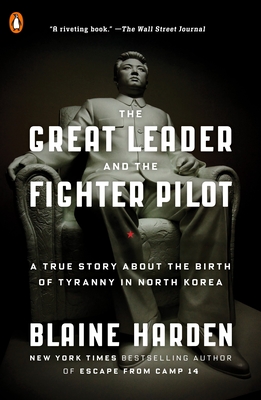 Harden masterfully tells the story of good versus evil in this dual biography of two very different North Korean men. Told primarily in the time of the Korean War, this book gives us proper context as to why North Korea is so out of touch in today's world. This is an important story (just like Harden's previous "Escape From Camp 14") that shows the complexities of living under the brutal North Korean dictatorship.

Blaine Harden, New York Times–bestselling author of Escape From Camp 14, tells the riveting story of Kim Il Sung’s rise to power and the young North Korean fighter pilot who dared to defy him.

In the aftermath of World War II, Kim Il Sung plunged North Korea into war against the United States while the youngest fighter pilot in his air force was playing a high-risk game of deception—and escape. As Kim ascended from Soviet puppet to godlike ruler, No Kum Sok pretended to love his Great Leader. That is, until he swiped a Soviet MiG-15 and delivered it to the Americans, not knowing they were offering a $100,000 bounty for the warplane (the equivalent of nearly one million dollars today). The theft—just weeks after the Korean War ended in July 1953—electrified the world and incited Kim’s bloody vengeance.

During the Korean War the United States brutally carpet bombed the North, killing hundreds of thousands of civilians and giving the Kim dynasty, as Harden reveals, the fact-based narrative it would use to this day to sell paranoia and hatred of Americans. Drawing on documents from Chinese and Russian archives about the roles of Mao and Stalin in Kim’s shadowy rise, as well as from never-before-released U.S. intelligence and interrogation files, Harden gives us a heart-pounding adventure and an entirely new way to understand the world’s longest-lasting totalitarian state.

Blaine Harden is the author of Africa: Dispatches from a Fragile Continent; A River Lost: The Life and Death of the Columbia; and Escape from Camp 14. Africa won a PEN American Center citation for first book of nonfiction. Escape from Camp 14 was both a New York Times and an international bestseller published in twenty-seven languages. Harden lives in Seattle.

"A fascinating retelling of a tale from the early years of the Cold War. . . . [an] artful narrative." —The New York Times

"Blaine Harden has done more than anyone else to bring [North Korea] to a mass audience. . . . Thrilling stuff." —The Washington Post

"By contrasting these emblematic figures [Kim Il-Sung and No Kum Sok], Mr. Harden has produced a riveting book that makes the history of North Korea accessible to the general reader." —Wall Street Journal

"A gripping account of the battle fought in the skies and its lasting significance." —The Economist

"An eminently readable picture of our most under-remembered war." —The Daily Beast

"[A] rigorously researched and entrancing tale of the Korean War." —Los Angeles Review of Books

"Reads like an impossible-to-put down thriller." —Christian Science Monitor

“Harden delivers another page-turner...weav[ing] together narratives of ‘Great Leader’ Kim Il Sung and No Kum Sok, who harbored a childhood dream of coming to the U.S., even though ‘at 19 he became the youngest jet fighter pilot on either side of the Korean War...’ With access to No and newly released intelligence, Harden presents fresh insights into North Korea.” —Publishers Weekly

“A rewarding book with much to offer, including the likely spark of new interest in how singular choices made by both men and nations can reverberate for generations.” —Kirkus Reviews

“An enjoyable read that is highly recommended for those interested in Cold War or North Korean history, or for anyone who likes a strong narrative.” —Library Journal (starred review)

"Blaine Harden takes us on a fascinating journey deep into the dark origins of the North Korean state, leavened by a stirring account of one young man's courageous quest to escape it. Thoroughly transporting." —Daniel James Brown, New York Times bestselling author of The Boys in the Boat

“I could not put this book down. The interwoven stories of Kim Il-Sung and MiG fighter pilot No Kum Sok are carefully researched and artfully told. Harden shows how each man played the system to achieve his lifelong goal—in Kim's case, the creation of a personality cult and oppressive regime, and in No's case, defection from it. Harden succeeds in offering a unique lens on North Korean history and politics that offers something for both the general and expert readership.” —Dr. Victor Cha, Professor of Government and Director of Asian Studies, Georgetown University; former National Security Council director for Asian affairs, 2004-7

“Having exposed the full horror of the North Korean gulag by telling the story of Shin Dong-hyuk’s escape from Camp 14, Blaine Harden now uses contrasting portraits of the founding tyrant Kim Il Sung and the young MiG pilot who flew to freedom six decades ago to explain how the monstrous political system of North Korea came into existence in the first place.  The result is a triumph of story-telling that brings history to life and explains why the North Korean regime is such a menace to its own people and to the world.” —Carl Gershman, President of the National Endowment for Democracy

“The Great Leader and the Fighter Pilot is at once a fascinating look at how evil takes hold and how one ordinary man escapes its grasp with wit and determination. Harden’s compelling narrative is not to be missed, an outstanding follow-up to Escape from Camp 14.” —Gregory A. Freeman, author of The Gathering Wind: Hurricane Sandy, the Sailing Ship Bounty, and a Courageous Rescue at Sea

“A masterful account of a forgotten story from a forgotten war. In an artful blending of the stories of Kim Il-Sung’s rise to power and leadership of North Korea during the Korean War, with that of No Kum Sok, a young man who became a fighter pilot in the North Korean Air Force and who defected to South Korea in his MiG-15, Harden provides us with a unique insight into a missing chapter of the Korean War. Harden’s account of No Kum Sok’s life before, during and after the Korean War is a commanding performance of interviews and exploitation of declassified intelligence documents. The Great Leader and the Fighter Pilot is recommended to anyone interested in the Korean War, Kim Il-Sung or military aviation.” —Joseph Bermudez, North Korea expert and Chief Analytics Officer and Co-Founder, A Unique Advantage

Praise for Escape From Camp 14

"Harden’s book, besides being a gripping story, unsparingly told, carries a freight of intelligence about this black hole of a country." —Bill Keller, The New York Times

“A remarkable story, [Escape from Camp 14 ] is a searing account of one man’s incarceration and personal awakening in North Korea’s highest-security prison.” —The Wall Street Journal

“A book without parallel, Escape from Camp 14 is a riveting nightmare that bears witness to the worst inhumanity, an unbearable tragedy magnified by the fact that the horror continues at this very moment without an end in sight.” —Terry Hong, Christian Science Monitor

"U.S. policymakers wonder what changes may arise after the recent death of North Korean leader Kim Jong Il, this gripping book should raise awareness of the brutality that underscores this strange land. Without interrupting the narrative, Harden skillfully weaves in details of North Korea's history, politics and society, providing context for Shin's plight.” —The Associated Press

“[Shin’s] tale becomes even more gripping after his unprecedented journey . . . after he realizes that he has been raised as something less than human. He gradually, haltingly—and, so far, with mixed success—sets out to remake himself as a moral, feeling human being.” —Fred Hiatt, The Washington Post

“A riveting new biography . . . If you want a singular perspective on what goes on inside the rogue regime, then you must read [this] story.  It’s a harrowing tale of endurance and courage, at times grim but ultimately life-affirming.” —CNN

“As an action story, the tale of Shin’s breakout and flight is pure The Great Escape, full of feats of desperate bravery and miraculous good luck. As a human story it is gut wrenching; if what he was made to endure, especially that he was forced to view his own family merely as competitors for food, was written in a movie script, you would think the writer was overreaching. But perhaps most important is the light the book shines on an under-discussed issue, an issue on which the West may one day be called into account for its inactivity.” —The Daily Beast

“Blaine Harden's chronicle of Shin Dong-hyuk's life in a North Korean prison camp and his eventual escape is a slim, searing, humble book—as close to perfect as these volumes of anguished testimony can be.” —Book Forum