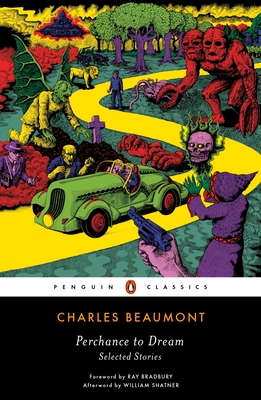 Charles Beaumont was the mind behind a number of popular Twilight Zone episodes. He died young, but he left behind a collection of short stories that have been faithfully reproduced by Penguin with a forward by Ray Bradbury. If you're a fan of The Twilight Zone or just enjoy strange ideas, this is the collection to pick up.

With Jordan Peele's Twilight Zone reboot arriving, read the stories that inspired some of the show's greatest episodes, including "The Howling Man"!

The profoundly original and wildly entertaining short stories of a legendary Twilight Zone writer, with a foreword by Ray Bradbury and an afterword by William Shatner

It is only natural that Charles Beaumont would make a name for himself crafting scripts for The Twilight Zone—for his was an imagination so limitless it must have emerged from some other dimension. Perchance to Dream contains a selection of Beaumont’s finest stories, including seven that he later adapted for Twilight Zone episodes.

Beaumont dreamed up fantasies so vast and varied they burst through the walls of whatever box might contain them. Supernatural, horror, noir, science fiction, fantasy, pulp, and more: all were equally at home in his wondrous mind. These are stories where lions stalk the plains, classic cars rove the streets, and spacecraft hover just overhead. Here roam musicians, magicians, vampires, monsters, toreros, extraterrestrials, androids, and perhaps even the Devil himself. With dizzying feats of master storytelling and joyously eccentric humor, Beaumont transformed his nightmares and reveries into impeccably crafted stories that leave themselves indelibly stamped upon the walls of the mind. In Beaumont’s hands, nothing is impossible: it all seems plausible, even likely.

"[Beaumont’s] imagination, as Perchance to Dream amply shows, was more than most writers enjoy in the longest of lifetimes." -NPR

For more than sixty-five years, Penguin has been the leading publisher of classic literature in the English-speaking world. With more than 1,500 titles, Penguin Classics represents a global bookshelf of the best works throughout history and across genres and disciplines. Readers trust the series to provide authoritative texts enhanced by introductions and notes by distinguished scholars and contemporary authors, as well as up-to-date translations by award-winning translators.

Charles Beaumont (1929–1967) was the author of three collections of short stories and two novels. He penned twenty-two episodes of The Twilight Zone, considered some of the show’s finest.

Ray Bradbury (1920–2012) was the author of hundreds of short stories and nearly fifty books, as well as numerous poems, essays, operas, plays, teleplays, and screenplays. His works includeFahrenheit 451 and The Martian Chronicles.

William Shatner has cultivated a career spanning more than fifty years as an award-winning actor, director, producer, writer, and recording artist. In 1962, he earned his first starring role in Roger Corman’s The Intruder, written by Charles Beaumont. His career highlights include the iconic role of Captain James T. Kirk in the Star Trek television series and movies.

"This fresh collection of Beaumont's weird fiction is rife with fantastical tropes and twist endings...Twist endings get a bad rap in our oh-so-sophisticated millennium, but in Perchance to Dream, they're in the hands of a master...Throughout the book, Beaumont challenges perception, norms, and our smug reliance on appearances, using supernatural and science-fictional elements to drive home his points — sometimes gently, sometimes jarringly...[Beaumont’s] imagination, as Perchance to Dream amply shows, was more than most writer's enjoy in the longest of lifetimes."
-NPR

“In every genre he explored, Beaumont wrote with style, with a sure sense of his characters. His stories are often haunting, and though their concerns are ever enduring, they provide a clear window into the fears and hopes of his time.”
–Dean Koontz

“The name of Charles Beaumont will be honored and recognized for generations yet to come.”
—Robert Bloch

"Terrifically creepy pieces that almost always end with a twist...Beaumont deserves the wider audience this volume can provide."
—Library Journal

"As a writer, Beaumont never seemed particularly concerned with observing the hard boundary lines of genre, and sometimes slipped over it and across again with gleeful abandon. As a writer of imaginative fiction, Beaumont was especially adept at the use of fiction as an object lesson, using it as a mirror to force readers to confront their own complacency and small-mindedness. In Beaumont’s hands, wishes become nightmares, and the road to hell is always paved with good intentions."
—Suvudu

"This is a worthwhile and important collection, preserving an author’s work for a new generation of readers. Read them. Get angry. Be shocked. Laugh. Charles Beaumont’s work will certainly provoke your imagination."
—Weird Fiction Review