The Madness Underneath: Book 2 (The Shades of London #2) (Paperback) 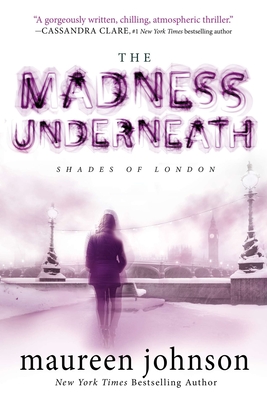 This is book number 2 in the The Shades of London series.

A new threat haunts the streets of London…
Rory Deveaux has changed in ways she never could have imagined since moving to London and beginning a new life at boarding school. As if her newfound ability to see ghosts hadn’t complicated her life enough, Rory’s recent brush with the Jack the Ripper copycat has left her with an even more unusual and intense power. Now, a new string of inexplicable deaths is threatening London, and Rory has evidence that they are no coincidence. Something sinister is going on, and it is up to her to convince the city’s secret ghost-policing squad to listen before it’s too late.

“Creepy, clever and ambiguous second volume in the Shades of London series . . . As always, Johnson wields words with a supple facility that keeps those pages turning. The London minutiae are utterly engaging, the villains satisfyingly weird and numerous. And there is kissing.” --Kirkus Reviews

“Rory’s internal monologue sparkles with the wit that Johnson’s fans (and most of Twitter) will recognize, which is plenty entertaining. The second half will satisfy readers’ craving for what they came for—Rory’s investigation of London’s latest ghost crimes—while laying tragic groundwork for the next book.” --Publishers Weekly

"Readers will remain on the edge of their seats. . . . Johnson’s sharp wit is ever-present, and her heroine is the perfect blend of snark and teen anxiety." --School Library Journal


Raves for Maureen Johnson and The Name of the Star, the first book in the Shades of London series
“A gorgeously written, chilling, atmospheric thriller. The streets of London have never been so sinister or so romantic.” —Cassandra Clare, #1 New York Times bestselling author of The Infernal Devices and The Mortal Instruments series

Johnson “turns paranormal on its head . . . realistic and creepy. A real page-turner.” —SLJ

“An unputdownable thrill ride that will leave you gasping, laughing, and dreaming of London.” —Ally Carter, New York Times bestselling author of the Gallagher Girls series and Heist Society

“Johnson proves again that she has the perfect brisk pitch for YA literature, never overplaying
(or underplaying) the various elements of tension, romance, and attitude. [A] cut above.” —Booklist

“This book made me want to give up everything, move to London, and fight ghosts.” —Holly Black, New York Times bestselling author of The Curse Workers series

“Clever, scary, little-bit-sexy . . . . supernatural thriller. Will have readers madly eager for the next installment.” —Kirkus Reviews

“[R]eaders looking for nonstop fun, action, and a little gore have come to the right place.”—Publisher’s Weekly