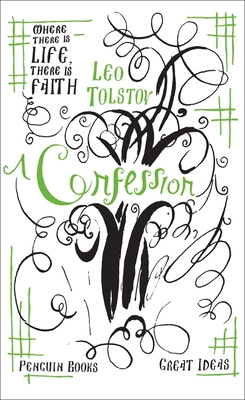 The legendary author’s passionate and iconoclastic writings – on issues of faith, immortality, freedom, violence, and morality--reflect his intellectual search for truth and a religion firmly grounded in reality. However, despite his success with works like War and Peace and Anna Karenina, Leo Tolstoy, at age 51, looked back on his life and considered himself a failure. A Confession provides valuable insight into Tolstoy’s thoughts and ideas as his later philosophical ideas began to evolve and change.

Count Leo Tolstoy was born on September 9, 1828, in Yasnaya Polyana, Russia. Orphaned at nine, he was brought up by an elderly aunt and educated by French tutors until he matriculated at Kazan University in 1844. In 1847, he gave up his studies and, after several aimless years, volunteered for military duty in the army, serving as a junior officer in the Crimean War before retiring in 1857. In 1862, Tolstoy married Sophie Behrs, a marriage that was to become, for him, bitterly unhappy. His diary, started in 1847, was used for self-study and self-criticism; it served as the source from which he drew much of the material that appeared not only in his great novels War and Peace (1869) and Anna Karenina (1877), but also in his shorter works. Seeking religious justification for his life, Tolstoy evolved a new Christianity based upon his own interpretation of the Gospels. Yasnaya Polyana became a mecca for his many converts At the age of eighty-two, while away from home, the writer suffered a break down in his health in Astapovo, Riazan, and he died there on November 20, 1910.