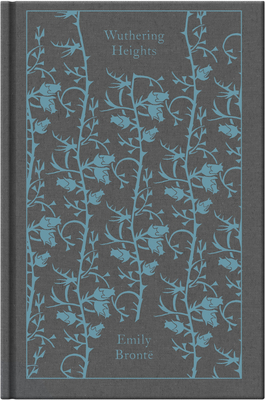 Part of Penguin's beautiful hardback Clothbound Classics series, designed by the award-winning Coralie Bickford-Smith, these delectable and collectible editions are bound in high-quality colourful, tactile cloth with foil stamped into the design. In a house haunted by memories, the past is everywhere ... As darkness falls, a man caught in a snowstorm is forced to shelter at the strange, grim house Wuthering Heights. It is a place he will never forget. There he will come to learn the story of Cathy: how she was forced to choose between her well-meaning husband and the dangerous man she had loved since she was young. How her choice led to betrayal and terrible revenge - and continues to torment those in the present. How love can transgress authority, convention, even death.

Emily Brontë (1818-48) along with her sisters, Charlotte and Anne, is one of the most significant literary figures of the 19th century. She wrote just one strikingly innovative novel but was also a gifted and intense poet. Pauline Nestor teaches English at Monash University, Australia. Lucasta Miller was educated at Lady Margaret Hall, Oxford.

"It is as if Emily Brontë could tear up all that we know human beings by, and fill these unrecognizable transparencies with such a gust of life that they
transcend reality."
--Virginia Woolf