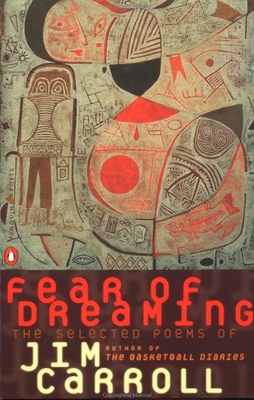 Carroll, a diarist and rock performer, is best known for his coming-of-age memoir The Basketball Diaries, which became an instant classic when it was first published in 1978 and then a national bestseller when a film version of the book was released in 1995. Carroll initially made his reputation as a poet, and has won acclaim and comparisons to everyone from Rimbaud to Frank O’Hara for his delicate yet hallucinatory imagery.

This volume of poetry collects selections from Jim Carroll’s Living at the Movies, which was published in 1973 when he was twenty-two, and The Book of Nods, released in 1986. Fear of Dreaming also includes pieces previously unpublished in book form, including “Curtis’s Charm,” a vignette set in New York City’s Central Park about a man convinced he is a victim of black magic, and poetic tributes to Robert Mapplethorpe and Ted Berrigan.

Jim Carroll’s bestselling memoir The Basketball Diaries was first released in 1978 and adapted as a film in 1995. Carroll’s work includes several collections of poetry as well as a asecond memoir, Forces Entries: The Downtown Diaries 1971-1973. As the leader of The Jim Carroll Band he released three albums as well as several spoken word recordings. He died in New York City on September 11, 2009.