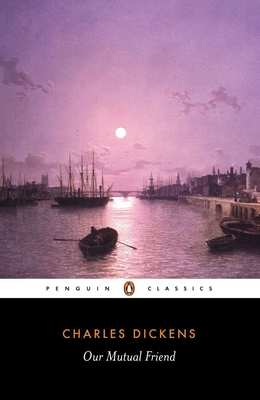 Our Mutual Friend centres on an inheritance - Old Harmon's profitable dust heaps - and its legatees, young John Harmon, presumed drowned when a body is pulled out of the River Thames, and kindly dustman Mr Boffin, to whom the fortune defaults. With brilliant satire, Dickens portrays a dark, macabre London, inhabited by such disparate characters as Gaffer Hexam, scavenging the river for corpses; enchanting, mercenary Bella Wilfer; the social-climbing Veneerings; and the unscrupulous street-trader Silas Wegg. The novel is richly symbolic in its vision of death and renewal in a city dominated by the fetid Thames, and the corrupting power of money. Our Mutual Friend uses text of the first volume edition of 1865 and includes original illustrations, a chronology and revised further reading. As Adrian Poole writes in his introduction to this new edition, 'In its vast scope and perilous ambitions it has much in common with Bleak House and Little Dorrit, but its manner is more stealthy, on edge, enigmatic.'

Charles Dickens was born on February 7, 1812, in Landport, Portsea, England. He died in Kent on June 9, 1870. The second of eight children of a family continually plagued by debt, the young Dickens came to know not only hunger and privation,but also the horror of the infamous debtors’ prison and the evils of child labor. A turn of fortune in the shape of a legacy brought release from the nightmare of prison and “slave” factories and afforded Dickens the opportunity of two years’ formal schooling at Wellington House Academy. He worked as an attorney’s clerk and newspaper reporter until his Sketches by Boz (1836) and The Pickwick Papers (1837) brought him the amazing and instant success that was to be his for the remainder of his life. In later years, the pressure of serial writing, editorial duties, lectures, and social commitments led to his separation from Catherine Hogarth after twenty-three years of marriage. It also hastened his death at the age of fifty-eight, when he was characteristically engaged in a multitude of work.


Adrian Poole is a Fellow of Trinity College, Cambridge.

‘The great poet of the city. He was created by London’
—Peter Ackroyd

Adrian Poole writes in his introduction to this new edition, ‘In its vast scope and perilous ambitions it has much in common with Bleak House and Little Dorrit, but its manner is more stealthy, on edge, enigmatic’.