The Chronicles of Chrestomanci, Volume I (Paperback) 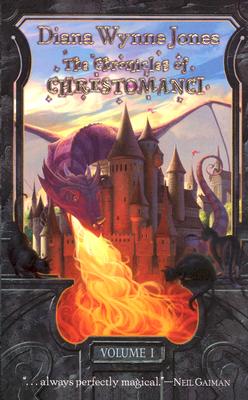 This is book number 1 in the Chronicles of Chrestomanci series.

Do you love magic? Do you wistfully wish for something that compares to Harry Potter? Have you ever tried Diana Wynne Jones? Jones was a huge inspiration to J.K. Rowling but even if you aren't a Harry Potter fan, Jones' books will sweep you off your feet. In The Chronicles of Chrestomanci, Cat and his sister Gwendolyn could not be more different. Gwendolyn excels at magic but Cat has no gifting to speak of and prefers a quieter life. So it's a surprise to both of them when they are each invited to live in the Chrestomanci castle to apprentice under the great magician himself. Prepare to be swept away by Jones' style of magic and her wonderful characters.

In this multiple parallel universes of the Twelve Related Worlds, only an enchanter with nine lives is powerful enough to control the rampant misuse of magic--and to hold the title Chrestomanci...

The Chants are a family strong in magic, but neither Christopher Chant nor Cat Chant can work even the simplest of spells. Who could have dreamed that both Christopher and Cat were born with nine lives--or that they could lose them so quickly?

In a career spanning four decades, award-winning author Diana Wynne Jones (1934‒2011) wrote more than forty books of fantasy for young readers. Characterized by magic, multiple universes, witches and wizards—and a charismatic nine-lived enchanter—her books are filled with unlimited imagination, dazzling plots, and an effervescent sense of humor that earned her legendary status in the world of fantasy.