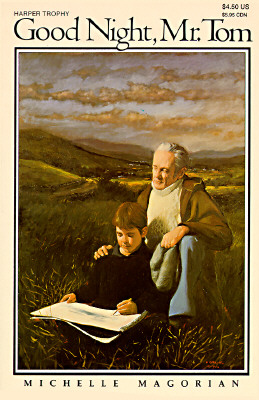 By Michelle Magorian
$7.99
Unavailable at this time.

A powerfully emotional award-winning novel about the ways we save each other.

London is poised on the brink of World War II. Eight-year-old Willie Beech is evacuated to the English countryside and lands on Thomas Oakley’s doorstep, timid and scarred from abuse. Mr. Tom, a gruff but kindly old man, is deeply moved for the boy, treating him with a gentleness he’s forgotten he’s even capable of. With Mr. Tom’s help, Willie forgets his hateful past and learns to love a world he never knew existed, a world of friendship and affection and joy.

But then a telegram comes, and Willie is ordered to return to London. When weeks pass without word from him, Mr. Tom sets out for London to once again rescue the boy he’s come to love as a son.

Michelle Magorian novels for young people have won awards in America, Britain, and Australia and have been adapted for television, radio, and theatre. She has also written the libretto for Goodnight Mister Tom, a winner at the Quest Fest for New Musicals, which was published by Josef Weinberger.