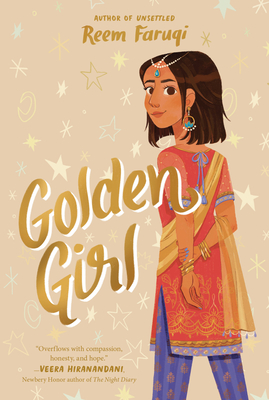 From the award-winning, ALA Notable author of Unsettled and Lailah’s Lunchbox, this is a captivating coming-of-age middle grade novel in verse about seventh grader Aafiyah Qamar, a Pakistani American girl who hatches a special plan to help her family but finds that doing what’s right isn’t always easy. For fans of The Thing About Jellyfish and Clean Getaway, this is a heartfelt, soul-searching story with laughter, hope, and lessons learned.

Seventh grader Aafiyah loves playing tennis, reading Weird but True facts, and hanging out with her best friend, Zaina. However, Aafiyah has a bad habit that troubles her—she’s drawn to pretty things and can’t help but occasionally “borrow” them.

But when her father is falsely accused of a crime he hasn’t committed and gets taken in by authorities, Aafiyah knows she needs to do something to help. When she brainstorms a way to bring her father back, she turns to her Weird but True facts and devises the perfect plan.

But what if her plan means giving in to her bad habit, the one she’s been trying to stop? Aafiyah wants to reunite her family but finds that maybe her plan isn’t so perfect after all. . .

"Faruqi proves herself once again a master of middle grade verse novels. Golden Girl is a phenomenal story loaded with heart and hope.” —Adrianna Cuevas, author of the Pura Belpré honor book The Total Eclipse of Nestor Lopez, Cuba in My Pocket, and The Ghosts of Rancho Espanto

“A story that sends an important message—that people who make bad choices are not bad people.” —Padma Venkatraman, Walter Award-winning author of The Bridge Home

Reem Faruqi is the ALA Notable author of Lailah’s Lunchbox, Amira’s Picture Day, I Can Help, Golden Girl, and Unsettled, which is loosely based on Reem’s own story. Of Pakistani descent, Reem immigrated to Peachtree City, Georgia, in the United States from the United Arab Emirates when she was thirteen years old. Reem is also a teacher and photographer who loves to doodle. She lives in Atlanta with her husband and three daughters. Visit her online at www.reemfaruqi.com.

"Seventh-grader Aafiyah's charmed life is not without flaws, but it takes a sudden turn when her father is falsely accused of a crime. As Aafiyah tries to help her family, she ends up making all the wrong choices for all the right reasons and has to face her own challenges in a new way. Faruqi's beautifully observed and page-turning novel in verse overflows with compassion, honesty, and hope." — Veera Hiranandani, Newbery Honor author of The Night Diary

"Faruqi proves herself once again a master of middle grade verse novels. Golden Girl is a phenomenal story which will engage readers with its unique main character and plot. Faruqi maximizes the impact of her words and gives a story loaded with heart and hope." — Adrianna Cuevas, Author of the Pura Belpre honor book The Total Eclipse of Nestor Lopez, Cuba in My Pocket, and The Ghosts of Rancho Espanto

“Defying cliche, Faruqi paints an unflinchingly honest portrait of a protagonist who makes mistakes - serious mistakes - and whose heroism lies in her ability to own up to her worst errors and do her best to make amends. A story that sends an important message - that people who make bad choices are not bad people.”  — Padma Venkatraman, Walter Award Winning Author of The Bridge Home

“This novel in verse has all the ingredients of an unforgettable book.”  — Shirin Shamsi, Author of Laila and the Sands of Time

"Aafiyah’s story is a relatable, real, and raw account of what it is like to be a teenage Muslim girl, and is a must-have on every bookshelf!" — Shifa Saltagi Safadi, Author of Spell it like S-A-M-A-R

“[Faruqi] writes with incisive sensitivity of a common disorder that gets little attention in youth literature…That Aafiyah’s path forward involves self-discipline and forgiveness will resonate with many readers.” — Bulletin of the Center for Children’s Books

“This story [has] a well-characterized, flawed heroine and a lot of heart.”  — Publishers Weekly

"Faruqi seamlessly weaves in elements of Aafiyah’s Islamic identity while capturing telling details about Aafiyah, her family, and other characters…A story about family, friendship, change, and hope." — Kirkus Reviews

“In Aafiyah, Faruqi creates a relatable but flawed protagonist whose road to redemption makes for an engaging, warmhearted story. Readers who enjoyed Hena Khan's Amina’s Voice (2017) or are looking for nuanced portrayals of South Asian Muslim identity will enjoy this selection." — Booklist

"Faruqi has the ability to infuse so much story and feeling into so few words. Her verse is beautiful, accessible, and relatable." — Rhonda Roumani, Journalist

"Reem Faruqi’s Golden Girl is a soul-stirring novel in verse. It evokes tenderness and togetherness while invoking truth-telling and transformation. With impeccable poetic finesse, Faruqi tells an honest story that gives young readers permission to make mistakes and grow from them while being held by friendship, family and faith." — Gayatri Sethi, PhD, Author of Unbelonging and co-founder of desi KidLit community

"I was swept away so completely and so fully in a story that is wonderful and memorable, and truly sets a higher standard for the way that a story can be told. Faruqi's voice and authenticity had me in tears." — Kirin Nabi, Islamic School Librarian Book Reviewer

"Reem Faruqi has done it again—another fabulous MG novel in verse that needs to be in every school and classroom library.” — Melissa Thom, Educator, Librarian, and Book Posse reviewer

"Faruqi is a novel in verse virtuoso." — Debb Adams, Educator