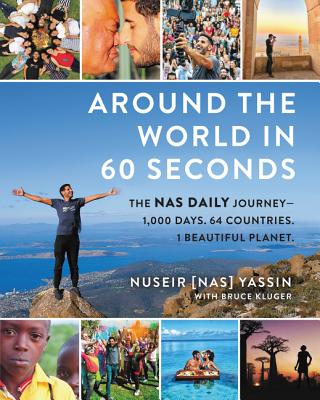 By Nuseir Yassin, Bruce Kluger
$29.99
On our shelves now at one or more of our stores

Based on the Nas Daily video series with over 13 million dedicated followers comes the surprising, moving 1,000-day journey of a lifetime in book form

In 2016, Nuseir Yassin quit his job to travel for 1,000 consecutive days. But instead of the usual tourist traps, Nas set out to meet real people, see the places they call home, and discover what unites all of us living on this beautiful planet—from villages in Africa and slums in India, to the high-rises of Singapore and the deserts of Australia. While he journeyed from country to country, Nas uploaded a single 60-second video per day for his Nas Daily Facebook following to highlight the amazing, terrifying, inspiring and downright surprising sh*t happening all over the world. Thirteen million followers later, Nas Daily has become the most immersive travel experience ever captured, and finally shows us what we’ve all been looking for: each other.

AROUND THE WORLD IN 60 SECONDS is Nas’ unpredictable 1,000-day world tour in book form. At times a striking portrait of the most uncharted places in the world, at others a touching exploration of the human heart, this collection of life-affirming stories and breathtaking photographs changes how we think about humanity and community and invites us all on a journey to see the world, and each other, anew.

Nuseir “Nas” Yassin is a Palestinian-Israeli who grew up in the village of Arraba in the country’s northern district. Fluent in Arabic, Hebrew, and English, he left Israel in 2010 to attend Harvard University on a full scholarship, where he graduated in 2014 with degrees in economics and computer science. Twenty months into his first post-college job as a software coder for Venmo, Nas made the decision that would change his life: to quit his job, gather his savings, and travel the world, sharing his adventures and discoveries on his dedicated Facebook page, Nas Daily. On January 5, 2019, Nas reached Day 1,000 of Nas Daily, having garnered an international audience of 12 million followers and 4.5 billion video impressions. He continues to post weekly videos on Nas Daily and has relocated to Singapore, where he is launching a media and video company with his best friends.