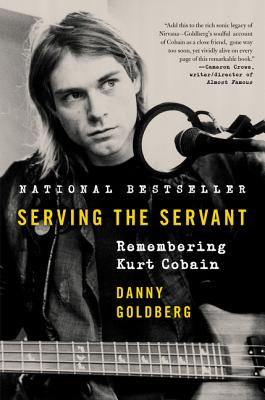 By Danny Goldberg
$28.99
Unavailable at this time.

Danny Goldberg was more than a band manager to Nirvana but a friend and confidant, especially to Kurt Cobain, at the height of their career. He is able to share the good and the bad, without idolizing or demonizing Cobain, in this look behind the music scene of the early nineties punk rock and grunge surge. So sit back, maybe unplug with Unplugged in the background, and enjoy.

In early 1991, top music manager Danny Goldberg agreed to take on Nirvana, a critically acclaimed new band from the underground music scene in Seattle. He had no idea that the band’s leader, Kurt Cobain, would become a pop-culture icon with a legacy arguably at the level of that of John Lennon, Michael Jackson, or Elvis Presley. Danny worked with Kurt from 1990 to 1994, the most impactful period of Kurt’s life. This key time saw the stratospheric success of Nevermind, which turned Nirvana into the most successful rock band in the world and made punk and grunge household terms; Kurt’s meeting and marriage to the brilliant but mercurial Courtney Love and their relationship that became a lightning rod for critics; the birth of their daughter, Frances Bean; and, finally, Kurt’s public struggles with addiction, which ended in a devastating suicide that would alter the course of rock history. Throughout, Danny stood by Kurt’s side as manager, and close friend.

Drawing on Goldberg’s own memories of Kurt, files that previously have not been made public, and interviews with, among others, Kurt’s close family, friends, and former bandmates, Serving the Servants sheds an entirely new light on these critical years. Casting aside the common obsession with the angst and depression that seemingly drove Kurt, Serving the Servants is an exploration of his brilliance in every aspect of rock and roll, his compassion, his ambition, and the legacy he wrought—one that has lasted decades longer than his career did. Danny Goldberg explores what it is about Kurt Cobain that still resonates today, even with a generation who wasn’t alive until after Kurt’s death. In the process, he provides a portrait of an icon unlike any that has come before.

Danny Goldberg is president and owner of Gold Village Entertainment, an artist management company; former CEO and founder of Gold Mountain Entertainment; former chairman and CEO of both Mercury Records and Artemis Records; former CEO of Air America; and frequent contributor to the Los Angeles Times, The Nation, Huffington Post, Dissent, Billboard, and many other outlets. He is the author of In Search of the Lost Chord, Bumping into Geniuses, and How the Left Lost Teen Spirit, and coeditor of It’s a Free Country. He lives in Pound Ridge, New York.

“One of the only books to come out of the singer’s inner circle ... Empathetic and absorbing, illuminating ... Conveys the frustration, the to-the-bone grief, that comes from losing a loved one who was fundamentally unknowable in the first place. It’s the closest thing we have to a survivor’s account.” — Washington Post

“A fascinating portrait of the life, music and inner workings of Cobain.” — Rolling Stone

“An expansive and insightful account of rock’s most tragic figure . . . inarguably the most intimate and firsthand biography about [Cobain’s] experience of fame to date.” — Forbes

“Sheds new light on the image of Cobain as a tortured artist and . . . reveals the compassion and ambition that truly drove him.” — Observer, “One of the 16 Most Anticipated Books of the Spring”

“Add this to the rich sonic legacy of Nirvana —Goldberg’s soulful account of Cobain as a close friend, gone way too soon, yet vividly alive on every page of this remarkable book.” — Cameron Crowe, writer/director of Almost Famous

“People always ask, “What was Kurt really like?” That’s probably not a question that any one person can answer about anybody, but anyone who knew Kurt will tell you that this book sends you vividly back to that person. Serving the Servant contributes an invaluable piece to a complicated collage.” — Michael Azerrad, author of Our Band Could Be Your Life and Come As You Are: The Story of Nirvana

“Insightful, passionate and cleareyed, Goldberg’s account of his personal and professional relationship with Kurt Cobain is required reading. It is essentially the story of two men, a generation apart, who became unexpected friends and a contemplative requiem to losing someone you love who touched the world with a singular magic.” — Thurston Moore, Sonic Youth

“As a fan, Danny Goldberg treasures Kurt Cobain as an artist. As Nirvana’s manager, he witnessed the ambition and empathy that drove Cobain toward stardom. As an activist, he admires Cobain’s courageously explicit politics. As Cobain’s shrewd advisor and fond friend, he misses him even more acutely than we do.” — Robert Christgau, author of Is It Still Good to Ya?: Fifty Years of Rock Criticism, 1967-2017

“I couldn’t put it down. As a huge Nirvana fan, it is petrifying to even attempt a description or enlightened comment about Kurt. I just want to say, any music fan should want this book. Any Nirvana fan must have this book.” — Joan Jett

“An emotionally resonant narrative of Cobain’s meteoric rise to superstardom and his attendant self-questioning depression . . . a worthy addition to the growing canon of books on Cobain.” — Publishers Weekly

“A deeply honest book that provides crucial insight into a brilliant life and a death that broke all of our hearts.” — Ann Powers, author of Good Booty: Love and Sex, Black and White, Body and Soul in American Music

“Amid all the darkness within and surrounding Kurt Coban, Danny Goldberg, his manager and friend, always saw the light. His portrait of Cobain is loving, intimate and three-dimensional. We feel the pain of Cobain’s loss anew, palpably—as we do the indelible power of the great gift of his music” — Anthony DeCurtis, Author of Lou Reed: A Life

“A thoughtful and oftentimes revelatory memoir . . . Goldberg was a crucial member of the band’s inner circle and, thus, offers unique insights.” — Booklist

“Fans of Cobain will devour this recollection of life with the artist.” — Library Journal