The House at Baker Street: A Mrs. Hudson and Mary Watson Investigation (Paperback) 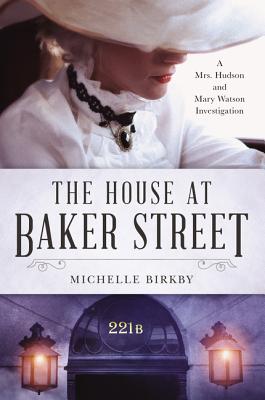 In this twist on the classic Sherlock Holmes mysteries, Holmes' intrepid housekeeper, Mrs. Hudson, joins forces with Mary Watson (wife of the good doctor) to solve a case the Great Detective has turned away. With appearances by your favorite supporting characters and a clever and compelling plot, you'll be hoping this is a start of a promising series.

Mrs. Hudson was always more than a landlady, and Sherlock Homes wasn't the only Baker Street resident with detective skill... After years of watching his habits, cleaning up his mess, and eavesdropping on interviews through a grate in the kitchen, Mrs. Hudson has learned a thing or two. So when Sherlock turns away the case of persecuted Mrs. Laura Shirley, she and Mary Watson resolve to help a fellow woman in need and take on the investigation themselves.

Blackmail, libel, extortion, murder--Mary and Mrs. Hudson quickly discover that Mrs. Shirley is not the only woman at risk, and as they put together the pieces of an increasingly complicated and dangerous puzzle, the investigation becomes far bigger than either of them could have ever imagined.

Enlisting the help of the Baker Street Irregulars and the infamous Irene Adler, she and Mary follow a trail of clues leading to the darkest corners of Whitechapel, where the feared Ripper is still rumored to stalk. But can Mrs. Hudson solve the case before it claims another life?

Wildly compelling and told in Mrs. Hudson's intelligent, compassionate voice, The House at Baker Street is an extraordinary debut. Michelle Birkby brings to life a cast of strong, complex female characters every bit as captivating as Conan Doyle's protagonist. If it's true that behind every great man is a great woman, it is time for one of literature's finest to step into the spotlight.