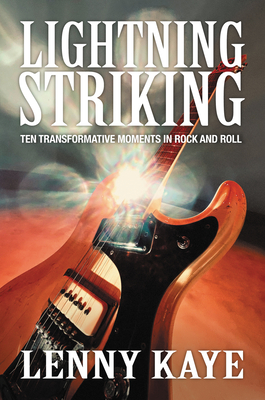 “We have performed side-by-side on the global stage through half a century…. In Lightning Striking, Lenny Kaye has illuminated ten facets of the jewel called rock and roll from a uniquely personal and knowledgeable perspective.”

Rock and roll was birthed in basements and garages, radio stations and dance halls, in cities where unexpected gatherings of artists and audience changed and charged the way music is heard and celebrated, capturing lightning in a bottle. Musician and writer Lenny Kaye explores ten crossroads of time and place that define rock and roll, its unforgettable flashpoints, characters, and visionaries; how each generation came to be; how it was discovered by the world. Whether describing Elvis Presley’s Memphis, the Beatles’ Liverpool, Patti Smith’s New York, or Kurt Cobain’s Seattle, Lightning Striking reveals the communal energy that creates a scene, a guided tour inside style and performance, to see who’s on stage, along with the movers and shakers, the hustlers and hangers-on--and why everybody is listening.

Grandly sweeping and minutely detailed, informed by Kaye’s acclaimed knowledge and experience as a working musician, Lightning Striking is an ear-opening insight into our shared musical and cultural history, a magic carpet ride of rock and roll’s most influential movements and moments.

Lenny Kaye is an American guitarist, composer, record producer, and writer, and is a founding member of Patti Smith and Her Band. In 2011, he was awarded the honor of Chevalier de l’Ordre des Arts et des Lettres by le Ministre de la Culture et de la Communication of France. He was inducted into the New Jersey Hall of Fame in 2021.

“His magnum opus, a rollicking tour through rock and roll history. . . . Touching on a dizzying array of famous and obscure musicians, bars, and clubs—and injecting the narrative with his own vivid memories of playing in such legendary places as Manhattan’s CBGB—Kaye brilliantly captures the ecstasy of what it was like to be there. . . . This memorable history is electrifying.”   — Publishers Weekly (starred review)

"An idiosyncratic, impassioned paean to rock ’n’ roll. . . . [Kaye has a] depth of historical knowledge that enables him to enumerate the sightings of the very phrase rock ’n’ roll. . . . The author engagingly chronicles his wide travels, visiting New Orleans, London, Memphis, and many other places in search of lost and otherwise magical chords. . . . If you’re a fan of rock music of whatever flavor, you need this book." — Kirkus Reviews (starred review)

“I first knew him as a writer. Then guitarist, lifelong friend, and collaborator. We have performed side-by-side on the global stage through half a century and shared his love of the evolution of our mutual vocation. In Lightning Striking, Lenny Kaye has illuminated ten facets of the jewel called rock and roll from a uniquely personal and knowledgeable perspective. He draws from a lifetime of inspiration and experience. A youth plugging in his first electric guitar, a fan taking the dance floor, a propelling player, a humble guardian of history, and the writer I have always known him to be.”   — Patti Smith

“Lightning Striking is a true testimonial and epic love letter to the soul saving power of rock and roll. Lenny Kaye writes with a guitar player’s rhythm and the image-strewn fevered prose of a beat poet, sharing arcane knowledge of the joy of a true believer. Read it and be inspired, as I was.” — Bobby Gillespie

"Guitarist Lenny Kaye writes about various you-had-to-be-there music scenes that each had a transformative impact on rock and roll. . . . Kaye’s personal reminiscences about performing with Patti Smith are among the highlights. Part history, part memoir, Lightning Striking is a fat, fun homage to the glory days of rock and roll and is full of vivid and revealing memories and anecdotes." — Booklist