The Dispossessed: A Novel (Paperback) 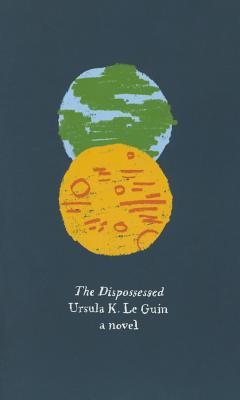 This novel follows Shevek, a physicist from the anarchist-Utopian settlement of the moon Anarres, in past and present. Beautifully written, sometimes it felt like I was reading a Socratic dialogue or Berkeley’s Three Dialogues. But, while heavy and emotional, it is never dense. Read this book!

“One of the greats….Not just a science fiction writer; a literary icon.” – Stephen King

From the brilliant and award-winning author Ursula K. Le Guin comes a classic tale of two planets torn apart by conflict and mistrust — and the man who risks everything to reunite them.

A bleak moon settled by utopian anarchists, Anarres has long been isolated from other worlds, including its mother planet, Urras—a civilization of warring nations, great poverty, and immense wealth. Now Shevek, a brilliant physicist, is determined to reunite the two planets, which have been divided by centuries of distrust. He will seek answers, question the unquestionable, and attempt to tear down the walls of hatred that have kept them apart.

To visit Urras—to learn, to teach, to share—will require great sacrifice and risks, which Shevek willingly accepts. But the ambitious scientist's gift is soon seen as a threat, and in the profound conflict that ensues, he must reexamine his beliefs even as he ignites the fires of change.

Ursula Kroeber Le Guin was born in 1929 in Berkeley, and lives in Portland, Oregon. As of 2014, she has published twenty-one novels, eleven volumes of short stories, four collections of essays, twelve books for children, six volumes of poetry, and four of translation, and has received many honors and awards, including the Hugo, Nebula, National Book Award, and PEN/Malamud. Her most recent publications are Finding My Elegy: New and Selected Poems and The Unreal and the Real: Selected Stories.

“This novel, by a celebrated Hungarian poet, depicts the world of his childhood…The narrator, a young boy whose family is shunned-it was once wealthy and is suspected of being Jewish-endures beatings, hunger, and taunts with the fatalism of someone who has never known anything else.”
— New Yorker