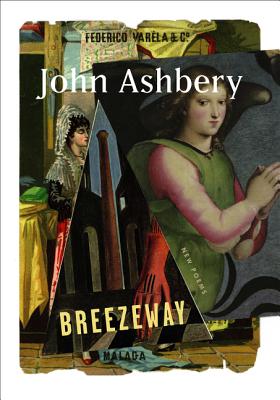 A bold, striking new collection of poems from one of America’s most influential and inventive poets.

With more than twenty poetry collections to his name, John Ashbery is one of our most agile, philosophically complex, and visionary poets. In Breezeway, Ashbery’s powers of observation are at their most astute; his insight at its most penetrating. Demonstrating his extraordinary command of language and his ability to move fluidly and elegantly between wide-ranging thoughts and ideas—from the irreverent and slyly humorous to the tender, the sad, and the heartbreaking—Ashbery shows that he is a virtuoso fluent in diverse styles and tones of language, from the chatty and whimsical to the lyrical and urbane. Filled with allusions to literature and art, as well as to the absurdities and delights of the everyday world around us, Ashbery’s poems are haunting, surprising, hilarious, and knowing all at once, the work of a master craftsman with a keen understanding of the age in which he lives and writes, an age whose fears and fragmentation he conjures and critiques with humor, pathos, and a provocative wit.

Vital and imaginative, Ashbery’s poems not only touch on the “big questions” and crises of life in the twenty-first century, but also delicately capture the small moments between and among people. Imaginative, linguistically dazzling, and artistically ambitious, Breezeway is John Ashbery’s sharpest and most arresting collection yet.

John Ashbery was born in Rochester, New York, in 1927. He wrote more than twenty books of poetry, including Quick Question; Planisphere; Notes from the Air; A Worldly Country; Where Shall I Wander; and Self-Portrait in a Convex Mirror, which received the Pulitzer Prize for Poetry, the National Book Critics Circle Award, and the National Book Award. The winner of many prizes and awards, both nationally and internationally, he received the Medal for Distinguished Contribution to American Letters from the National Book Foundation in 2011 and a National Humanities Medal, presented by President Obama at the White House, in 2012. Ashbery died in September 2017 at the age of ninety.

As always, his poems evoke the sound of a single voice engaged in simultaneous multiple conversations. . . . Ashbery remains an engaging trickster, still able to slip the occasional shrewd commentary (”Our networks will be joining you in progress”) into the playfully distracting chaos.”
— Library Journal

“One of the most anticipated poetry collections this spring, Breezeway is delightfully ambitious and imaginative - which is to say, everything we’ve come to expect from Ashbery.”
— Buzzfeed

“John Ashbery is the Walt Whitman of our postwar pop age, the prolific chronicler of American consciousness...Yet his long career has proven resilient precisely because-like few other species of modern poetics-he’s been so joyously able to absorb and adapt...Breezeway...is one of his best books.”
— Interview

“John Ashbery’s Breezeway is one of the most anticipated collections of the year. Readers who appreciate his mind-bending work will find the same kind of challenging richness he has offered in more than 20 collections of poetry.”
— Washington Post

“Ashbery’s familiar charms are all in evidence: his playful style and his stylish play, his knack for bent idiom and his rhetorical questions.”
— Boston Globe

“If you’ve ever had trouble appreciating the disjunctive, not entirely sensical work of America’s most celebrated living poet, try reading it out loud after getting high. Studies show that this method is most effective with Ashbery’s later work, so no harm starting your experiments with his excellent new collection.”
— New York magazine