Prisoner of Night and Fog (Hardcover) 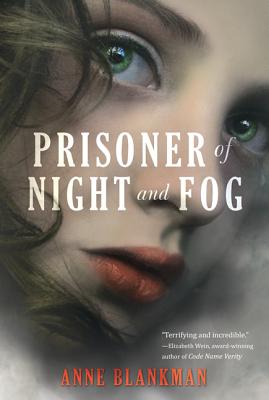 By Anne Blankman
$17.99
Unavailable at this time.

A gripping historical thriller set in 1930s Munich, Prisoner of Night and Fog is the evocative story of an ordinary girl faced with an extraordinary choice in Hitler's Germany. Fans of Code Name Verity will love this novel full of romance, danger, and intrigue!

Gretchen Müller grew up in the National Socialist Party under the wing of her uncle Dolf—who has kept her family cherished and protected from that side of society ever since her father sacrificed his life for Dolf's years ago. Dolf is none other than Adolf Hitler. And Gretchen follows his every command.

When she meets a fearless and handsome young Jewish reporter named Daniel Cohen, who claims that her father was actually murdered by an unknown comrade, Gretchen doesn't know what to believe. She soon discovers that beyond her sheltered view lies a world full of shadowy secrets and disturbing violence.

As Gretchen's investigations lead her to question the motives and loyalties of her dearest friends and her closest family, she must determine her own allegiances—even if her choices could get her and Daniel killed.

Anne Blankman is the acclaimed author of Prisoner of Night and Fog, which received a starred review and a Flying Start from Publishers Weekly. When Anne was twelve, she read Anne Frank's diary and has been haunted by World War II ever since. The idea for Conspiracy of Blood and Smoke came to her after she read about a real-life unsolved street assassination from January 1933, which was the inspiration for Monika Junge's murder. To research this book, she studied a wide range of sources, including biographies, memoirs, social histories, psychological profiles, old maps, photographs, and video footage.

Anne lives in southeastern Virginia with her husband, Mike, her young daughter, Kirsten, and, of course, lots and lots of books.

“I’m in awed envy of the daring with which Anne Blankman plunges into her difficult and sensitive subject matter. It’s terrifying and incredible to think how much of this story is true.” — Elizabeth Wein, award-winning author of CODE NAME VERITY

“PRISONER OF NIGHT AND FOG seamlessly blends the fascinating, terrifying facts of Hitler’s rise to power with a gripping murder mystery. Gretchen is a brave and believable protagonist, and readers will become engrossed in her struggle to uncover the truth. I can’t wait for the sequel.” — Michelle Cooper, award-winning author of the Montmaray Journals series

“A nail-biting visit to Adolf Hitler’s inner circle in the early days of the Nazi party’s rise to power.” — Jennifer Armstrong, author of In My Hands: Memories of a Holocaust Rescuer (with Irene Gut Opdyke)

“An interesting perspective on a well-trod era.” — Kirkus Reviews