Sometimes the Wolf: A Novel (Hardcover) 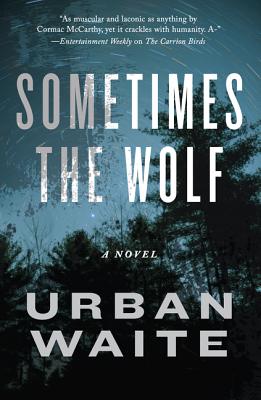 Set in the Pacific Northwest, a spellbinding story of family, violence, and unintended consequences that showcases the searing prose, soulful characters, and vivid sense of place of an acclaimed writer in the tradition of Cormac McCarthy, Dennis Lehane, and Elmore Leonard.

Sheriff Patrick Drake tried to lead an upstanding life and maintain some financial stability until his wife passed away. He did okay for a while, singlehandedly raising his family in a small mountain town. Then he was hit with money troubles, fell in with some unsavory men, and ended up convicted of one of the biggest crimes in local history.

Twelve years later Patrick is on parole under the watchful eye of his son Bobby, who just happens to be a deputy sheriff in his father’s old department. Bobby hasn’t had it easy, either. He’s carried the weight of his father’s guilt, forsaking his own dreams, and put off the knowledge that his own marriage could be stronger and more hopeful. Yet no matter how much distance he’s tried to put between himself, his father, his grandfather, and the past, small town minds can have very long memories.

But trouble isn’t done with the Drakes—and a terrifying threat boils up from Patrick’s old life. And this time, no one will be spared. . . .

Urban Waite is the author of the critically acclaimed novels The Carrion Birds and The Terror of Living, which was named one of Esquire's Ten Best Books of 2011. His work has been a finalist for the New Mexico and Arizona Book Awards, has been translated in nine languages, and is sold worldwide. He lives in Seattle with his wife.

“A tremendous novel by a rising powerhouse of a writer. Waite tells tense, thrilling stories with thoughtfulness and emotional clarity, and his prose is simply astonishing. Anyone who is late to the party couldn’t ask for a better entry point than this hybrid of crime drama and father-son story.”
— Michael Koryta, New York Times bestselling author of Those Who Wish Me Dead on Sometimes the Wolf

“It’s a rare thing to balance a thriller plot on characters with such stooped shoulders, but Waite manages the feat with surprising dexterity. Another emotionally rich novel from a very special writer.”
— Booklist (starred review)

“A brisk plot, well-developed characters, thoughtful reflections on the ebb and flow of family ties, and - most of all - Waite’s eloquent language describing his setting’s untamed beauty.”
— Seattle Times

“A father-and-son relationship, perhaps broken beyond repair, fuels Urban Waite’s engrossing novel that skillfully exposes the complicated emotions that can stymie a once close family while also working as a superb action-adventure tale.”
— Lisa Ko, author of The Leavers

“Waite . . . encourages you . . . to find out what happens while simultaneously forcing you to slow and admire the language. . . . Waite throws us into a rush of suspense and danger that tests the limits of the bond between father and son.”
— James Scott, author of The Kept on Sometimes the Wolf

“Waite keeps raising his own standards with each new novel and surpassing them with his next. . . . A beauteous and frightening joy to read from beginning to end. . . . It is violent and unsettling in spots, quiet and heartbreaking in others… Waite is a marvel.”
— Bookreporter.com

Two somewhat spectral killers. . . . Giv[e] the story a wildness that only gradually comes into focus. But when it does, you start to see the masterful construction of the novel, as - one-by-one - the strands of the plot create a tense and memorable net.
— The Oregonian (Portland)

“Taut dialogue, language that borders on poetry even as it describes murders and mayhem, artfully drawn settings, gripping tension, and believable, complicated characters. . . . Atmospheric, poetic, and hard to classify, SOMETIMES THE WOLF is a page-turning thriller. . . . A great story well told.”
— ReviewingTheEvidence.com

“Better than Cormac McCarthy. . . . Waite’s story about ex-con Dads, dangerous friends, and family loyalties peers into the same dark corners of the human psyche, but has a glimmer of warmth and humanity at its core which is lacking from a substantial portion of the noir genre.”
— LitReactor.com