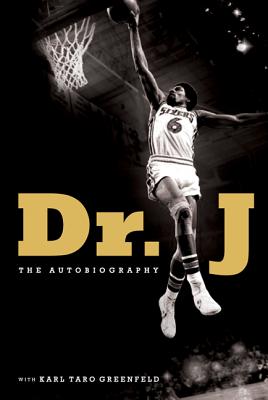 An honest, unflinching self-portrait of the basketball legend whose classy public image as a superstar and a gentleman masked his personal failings and painful losses, which he describes here--from his own point of view--for the very first time.

For most of his life, Julius Erving has been two men in one. There is Julius, the bright, inquisitive son of a Long Island domestic worker who has always wanted to be respected for more than just his athletic ability, and there is Dr. J, the cool, acrobatic showman whose flamboyant dunks sent him to the Hall of Fame and turned the act of jamming a basketball through a hoop into an art form. In many ways, Erving’s life has been about the push and pull of Julius and The Doctor.

It is Dr. J who has stories to tell of the wild days and nights of the ABA in the 1970s, and of being the seminal figure who transformed basketball from an earthbound and rigid game into the creative, free-flowing aerial display it is today. He has a long list of signature plays - he’s famous for winning the first dunk contest in 1976 with a jam on which he lifted off from the foul line, and he made a miraculous layup against the Lakers on which he soared behind the backboard before reaching back in to flip the ball in on the other side, with one hand. He inspired a generation of dunkers, including Michael Jordan, to express their improvisational talents.

But Julius wasn’t always as graceful and in control as Dr. J. Erving had a pristine image throughout his career and early retirement, but he was far from a perfect man. Here he gives detailed accounts of some of the personal problems he faced -- or created -- behind the scenes, including the adulterous affair with sports writer Samantha Stephenson, which led to the birth of his daughter, professional tennis player Alexandra Stephenson.

Though his marriage survived that infidelity, the death of Erving’s 20-year-old son Cory in 2000 in a tragic accident proved too much for the union to bear. Erving paints a raw, heartbreaking picture of the dissolution of his marriage, as his wife Turquoise began to blame him for his refusal to be paralyzed by grief for as long as she was. Their intense arguments came to a head when Erving stepped out of the shower one day to find his wife holding a lamp in one hand and a vase in the other, ready for a physical confrontation. “I knew somebody was going to get hurt, and it wasn’t going to be me,” he says. He packed a suitcase and he and Turquoise never lived under the same roof again.

Erving’s story is a tale of the nearly perfect player and the imperfect man, and how he has come to terms with both of them. It will appeal to readers on a sports level and on a human one.

Julius Erving is one of the greatest professional basketball players of all time and an American icon. He lives in Atlanta with his family. This is his first book.

Karl Taro Greenfeld is the author of seven previous books, including the novel Triburbia and the acclaimed memoir Boy Alone. His award-winning writing has appeared in Harper's Magazine, The Atlantic, The Paris Review, Best American Short Stories 2009 and 2013, and The PEN/O. Henry Prize Stories 2012. Born in Kobe, Japan, he has lived in Paris, Hong Kong, and Tokyo, and currently lives in Pacific Palisades, California, with his wife, Silka, and their daughters, Esmee and Lola.

“There’s enough basketball here to keeps fans interested, but the book isn’t really about what happens on the court. It’s about a thoughtful man who, for a time in his youth, was a famous athlete. A rewarding reading experience.”
— Booklist

“The book is quite an accomplishment: a terrific memoir by a man worthy of one.”
— Sports Illustrated