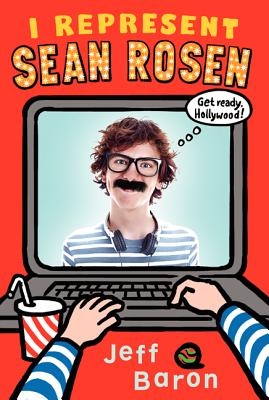 By Jeff Baron
$6.99
Unavailable at this time.

Sean Rosen makes funny videos you can watch online. He also has ideas for movies, TV shows, and games that he knows are good enough to be produced by the biggest studios in Hollywood. The only problem is, he's a kid. And he's busy with school. And he lives far from Los Angeles or New York City. But Sean does have a laptop and a phone, and he's smart. He's about to have the ride of a lifetime as he discovers the ins and outs—and dos and don'ts—of becoming one of the youngest movie moguls the world's ever known.

An inventive, original, and hilarious novel that will leave fans of Diary of a Wimpy Kid, Carl Hiaasen, and Louis Sachar eager for Sean's next adventure.

Jeff Baron wrote episodes of prime-time series for all the major networks. He worked on multiple movie and TV projects with Disney and Nickelodeon. He's an internationally acclaimed playwright, and earlier in his career he was a marketing director, speechwriter, cook, and camp counselor. He lives in New York City.

Sean Rosen lives somewhere in the middle, between New York City and Los Angeles. To watch Sean's podcasts—the very thing that made him famous in the first place—go to www.seanrosen.com.

“Burning with a big idea that he is convinced will revolutionize the entertainment industry, Sean recounts his improbable success story in such a glib mix of moves and countermoves that readers will be swept along in the giddy rush.” — Booklist

“Smart, funny, and fresh. I want Sean Rosen to represent me.” — Robert Lipsyte, author of The Twinning Project and One Fat Summer

“Baron examines such issues as navigating the complex world of movie screenwriting and maintaining artistic integrity. He deftly juxtaposes these scenarios with Sean’s reflections and witty observations regarding middle school life.” — Kirkus Reviews

“Wonderful, fast, vivid, funny. I read it with my son, and we [fought] over who would read and who would listen. I recommend it to any kid who plans to grow up and face the world of sharks and minnows, and any parent who wants a little reprieve from same.” — Rich Cohen, author of Sweet and Low and Alex and the Amazing Time Machine

“Baron’s fast-paced writing manages to capture not only a brilliant voice but also to convey the humor, affection, and frustration a smart and funny thirteen-year-old has for the life around him in a book that will delight any teen who dares to dream big.” — Everyday E-books

“Sean Rosen is a fascinating character, and readers will enjoy his farcical adventures. Told through letters, emails, texts, and prose, it appeals to today’s tech-savvy teens and tweens.” — Library Media Connection